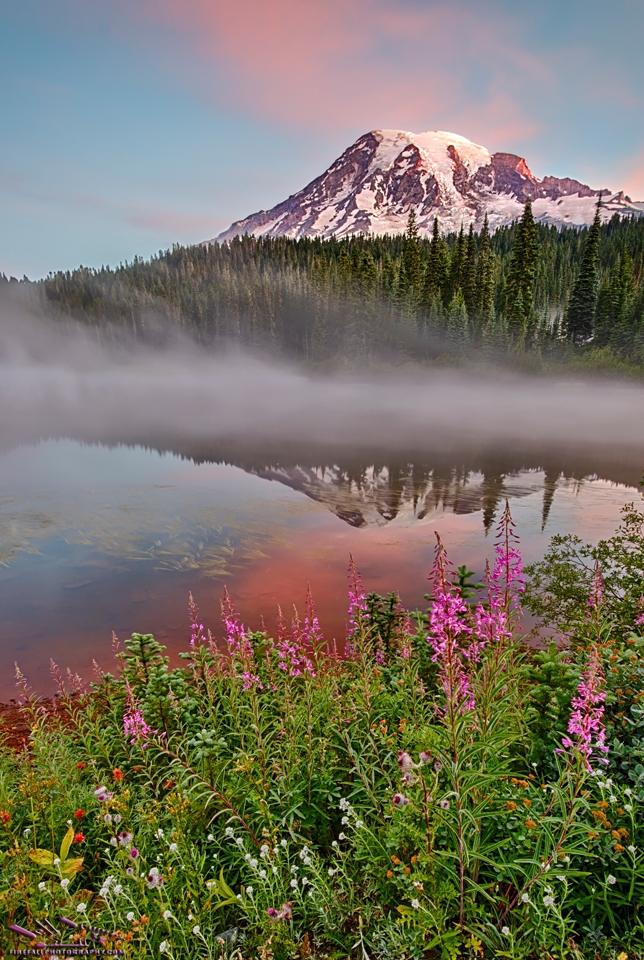 I know, I know…15 hours is a ridiculously short amount of time for a visit to a National Park…especially one as expansive as Rainier.  Ideally you want to be able to immerse yourself over a number of days to really get a ‘feel’ for the landscape plus you need more than a handful of hours to even see more than a smattering of the most popular photo locations.

Plus, the main reason I’ve long dreamed of visiting Rainier was to photograph the annual wildflower bloom…but that wouldn’t happen for another month or two.

But, I was going to be in the area and had only 15 hours open on my schedule so I was just going to have suck it up and experience the photographic equivalent of ‘speed dating’.   Even if I didn’t get any great photos, at least I’d be able to scout out the park and be better prepared next time.

I had reservations at the Paradise Inn, which is one of those old, timber framed lodges you find at many of the National Parks.   What it lacks in modern conveniences is more than made up by its location:  it is located high up on the mountain near the Paradise meadows which are famous for their wildflower displays.  So at 4pm I pulled up to the Inn, checked-in, grabbed my gear and hit the Skyline Trail.  And guess what?  The wildflowers were blooming!  Turns out that a poor snow pack that winter had resulted in an early melt…and early flowers!

That was the good news, the bad news is that the mountain was covered by fog and the trail was packed with what seemed like hundreds of people (I guess the early wildflower bloom was not a secret).  Could barely see ten feet and photography was not an option.  So I decided to drive to halfway around the park to check out another location I had seen on the internet: Tipsoo Lake.

Unlike the packed trails in Paradise, there were only a few other people at Tipsoo.  Even better there wasn’t any fog and it was also awash with flowers.   A nice sunset developed, but Rainier stubbornly remained hidden.

I set up behind the lake waiting for the sunset and passed the time talking with another photographer about the chances of Rainier making an appearance before sunset.  Didn’t happen.  About fifteen minutes after sunset (of course) the clouds around Rainier dissipated and we finally got a glimpse of the mountain but by then the sunset’s vibrant color was long gone. Just the same, there was a nice lavender alpenglow.  Not a dramatic sunset scene but nice in its own subtle, moody way.

Author’s note:  A couple years after writing this article, I had another chance to visit Tipsoo and I had better luck at sunrise (this really is a morning location).  The sky was clear, the wind was calm and the mountain’s reflection was just perfect. 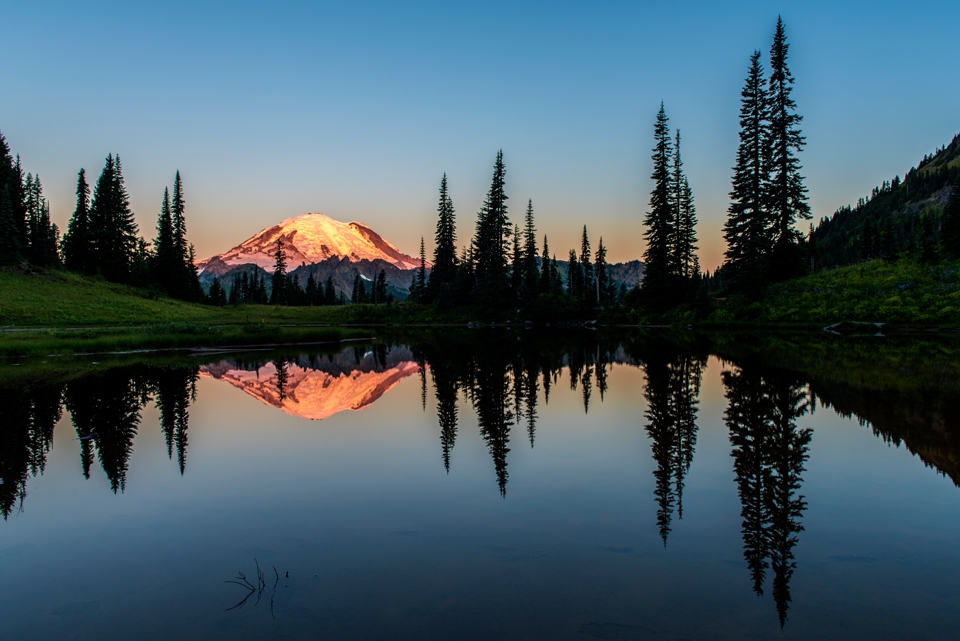 I ran up the hill behind the lake to capture this view that included the wildflowers Tipsoo is so well known for:

Sunset was a bit after 9pm and I had hoped to be back to my room by 10:30 but I managed to take a wrong turn on the way back to the Inn which added another hour to my drive.  Yes I had a GPS…but I found it didn’t help much when you’re dead tired, not paying attention AND have the sound on ‘mute.’

Needless to say, by the time I got back to the Inn the sky had darkened well enough for the Milky Way to be visible, so I decided go out on the trail next to the hotel and try some night shots.  Yeah, it was a bit spooky walking alone on the trail…but it was peaceful.  And since the sky was clear, I become incredibly aware of the Mountain.   I mean, Rainier is right in your face when you’re on the Skyline trail.  Huge, imposing and impossible to ignore.

After the moon set and Rainier faded into the darkness, I turned my attention to the south and enjoyed some time photographing the Milky Way.  Over the next couple house I tried a few different compositions before the realization hit me that I had to wake up in 3 hours to catch the sunrise.

As hiked back, I turned the final bend in the trail and the Paradise Inn came into sight.

I made it back to my room, fell into bed and I swear I had been laying down for not more than a few minutes when my alarm started wailing.   I managed to drive down to Reflection Lake which fortunately was less than 10 minutes from the hotel.

The lake was very foggy…I couldn’t even see the mountain but I had scouted the location on the way to Tipsoo the previous day so at least I knew where I wanted to set up.  I enjoyed the peace and quiet for about 30 minutes until some other photographers started to show up (Reflection Lake is a very well known sunrise spot). Gradually the fog lifted, Rainier became visible and the shutters started clicking .

The dawn was stingy with color but the lake was perfectly calm creating wonderful reflections plus the fog and clouds set a dramatic mood which lent itself to black and white processing.

Editor’s Note:  A nearby location I found a couple years after writing this blog is Inspiration Point.  See this link for details and a map.

I drove back to the Inn and hit the Skyline Trail one last time hoping to catch the wildflowers in the soft morning light. 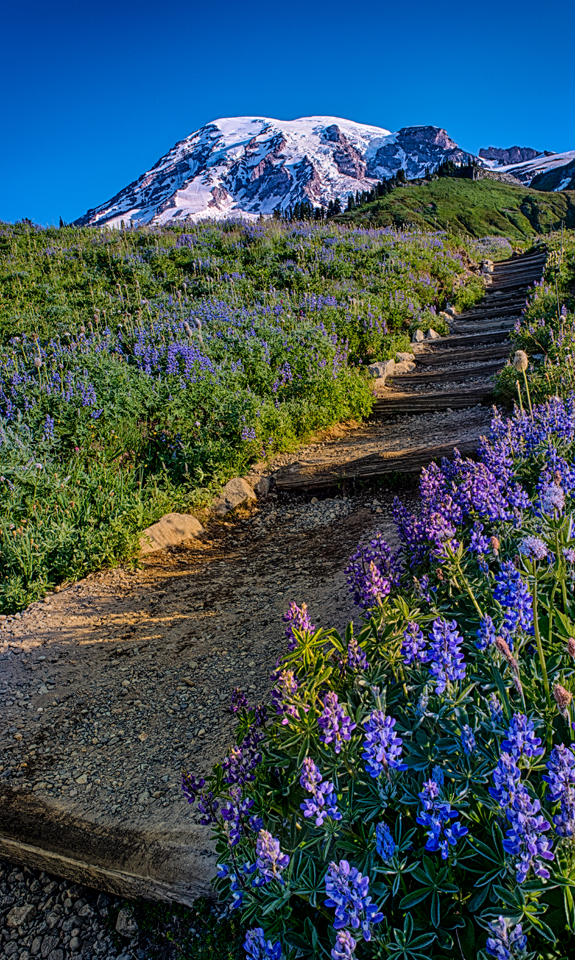 The day before, people had been queued up at the viewpoint to see Myrtle Falls but at 7am I had the place to myself. 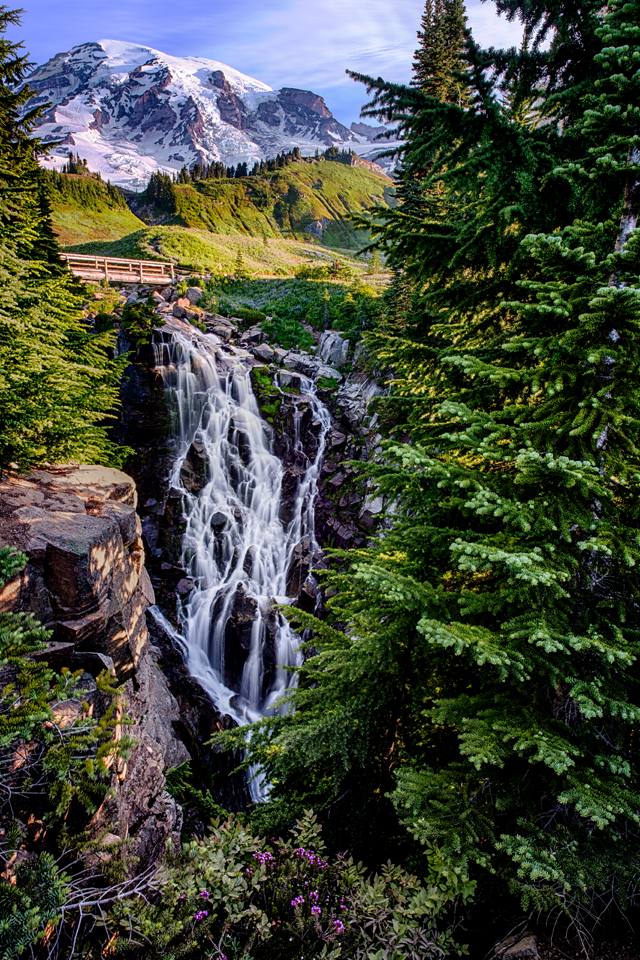 There were numerous signs asking you to stay on the trail in order to protect the delicate flowers, but I have to admit that I was sorely tempted to walk into the fields to take advantage of some potentially amazing views.  But, being an old Scoutmaster, I did the right thing and stuck to the trail so the folks who hiked the trail after me would see the same unmarked and pristine fields.

All too soon I had to be on my way… but I will return.  Next time, hopefully I’ll be able to schedule a full week and get the chance to hike and explore more of this magnificent Mountain.

PS:  I’m heading off tomorrow with my son for a ten day trip to Crater Lake, Columbia Gorge and Glacier National Park.   We will be doing some serious hiking (with my camera of course), and I’m sure I’ll be pretty worn out and sore when I return (just try to keep up with a 20 year old on a mountain trail)!  I’m  looking forward to sharing those photos and stories.  Talk to you soon!