"the words of the prophets are written on the subway walls..." A three-frame composite panorama of the incredible Subway at Zion National Park. This is one of those iconic locations that actually looks every bit as impressive as all those photos you studied for years before you had a chance to visit it in person.

If you are a photographer, then you know we live in challenging times.  The source of this concern is that there are a LOT of  talented and dedicated photographers out there and they are creating incredible images.  So why is that a problem?  Well, have you ever finally got to one of those locations on your ‘photographic bucket list’, set up your tripod, looked thru the viewfinder, and said to yourself….Crap, this doesn’t look at all like those pictures I’ve been looking at!

That’s the problem I’m talking about.

Heck, you get all excited, spend the money and time to travel to one of these photographic icons….and then the real thing just doesn’t look nearly as good as those images you saw on your computer back at home.

It’s happened to all of us…no matter how good our equipment or how talented (we think) we are.

So when I do get to a ‘bucket list’ spot and I look thru the viewfinder and what I see is there is as good as anything I’ve ever seen on the internet, well, then I know that I’m truly in the presence of something special.   A real Icon.

And I’m here to tell you that the Subway at Zion National Park is one of those Icons.  I don’t care how many photoshopped masterpieces you’ve seen taken by National Geographic Award Winning Photographers …the fact is that YOU can take a photo here that will compare well to the best of them and  make you shake your head in wonder.

Yeah, but here’s the hitch (there’s always a hitch).   It’s not easy to get to the subway.  Access is tightly restricted by a permit system plus you have to be willing and able to make a long hike.

Actually, there are two ways to get to the Subway.  One way involves rappelling and other mountain climbing type skills, so let’s forget about that one.  The second route is shorter and easier… its called the “Bottom-up” hike.  Although easier, it is still about a 10 miles roundtrip hike.  And it isn’t a smooth, easy trail.  The National Park Service calls this a strenuous hike.  That might be a bit of an exaggeration but it was certainly the toughest 10 mile hike I’ve done.  None of it is smooth, straight, level or flat.  You are constantly scrambling up and down over rocks and boulders.  Maybe this explains why less than 1% of Zion visitors make it to the Subway.

My son, Ryan, and I are confident hikers but we still took about two hours (not counting stops) to reach the Subway.  Once you figure in some breaks as well as stops for photography, it would be difficult to do this whole hike in less than seven hours.

But it is worth it!

Ryan and were in Zion this March and the Subway was #1 on our list of hikes.  We got to the trailhead a couple of hours after dawn and started down the trail.   To be honest, compared to other hikes in Zion, this one isn’t particularly beautiful.  To be brutally honest it was a long, tiring slog.  But as we finally approached the subway entrance things started to get very interesting.

Carved out from the colorful sandstone by moving water, the subway is aptly named.   Actually it is a narrow canyon with a thin opening in the ceiling but it really does look like someone burrowed a curving, round tube right thru the rock.

We set up our tripods and took our first shot.  We glanced at the result and then looked up at each other with huge, dopey smiles on our faces.  Shook our heads and got to work.  We were bouncing ideas off of each other, suggesting different angles, perspectives, camera settings…I was almost giddy.  The place is truly magical for a photographer!

The subway was a lot larger than I had imagined, the ceiling was about 20′ tall.  And the colors are amazing!  The chilly water saturates the rock which results in robust reds, fluorescent greens and subtle yellows.

Ryan thought it would be good to include people in some of the shots.  I’m kind of ‘old school’ and was taught to exclude people from my photographs.  But I’ve come to appreciate how much a human figure in an image provides a sense of proportion and fosters an emotional link to the image.  Looking thru my Subway shots now, the ones with people are among my favorites:  who says old dogs can’t learn new tricks?

The Subway is fully shaded and surprisingly cold, especially when the wind whips thru the ‘tunnel.’  We had a ball, despite the chill and managed to stay on our feet the whole time although the swift current and slippery rocks resulted in a couple slips that certainly got the adrenaline flowing for a moment or two.

There is a waterfall in a chamber at the back of the Subway, but the water levels were too high for us to reach it due to the snowmelt.  Something for our next trip.

We enjoyed the Subway’s magic for nearly 90 minutes before we regretfully packed up to head home.

We decided to stop for a well earned lunch at Arch Angel Cascades.  As we were enjoying our extravagant meal (Cliff Bars) we noticed a young couple coming down the stream headed for the Subway.  We waved and said hi.  About ten minutes later we were putting our packs back on when we saw the same couple heading back.  I guess they weren’t photographers.  They had hiked for 2 hours, looked at the Subway for five minutes or so, then turned around started the 2 hour walk home. Ryan and I were amazed.  Sure, the Subway is beautiful, but I wonder if I would be willing to walk 4 hours to look at something for less than 300 seconds!

The hike back seemed to take forever…possibly because I was dreading the climb near the end of the trail where you have to climb 500′ over less than a tenth of a mile.  That is one steep climb.  Of course my 21 year old son bolted up the trail like some kind of crazed mountain goat.  My 57 year old knees weren’t quite as nubile so he got to wait quite a while at the top before I clawed my way up.

Now, four months later,  the sore muscles are (nearly) forgotten.  But whenever I look at the photos I took that day, I smile and think of a place where you don’t have to be Ansel Adams or Tom Till to take a breathtaking photograph.

Normally, what you would see now on my blog would be a full length article on “How-to photograph the Subway” …but that isn’t going to happen:  Because someone has already done it.  I ran across this guide  by fellow photographer Nico Debarmore when I was first planning my trip.  His article is through, detailed, accurate and I highly recommend it to any photographer considering making a hike to the Subway.

In addition to Nico’s information, let me add a few random thoughts of my own:

Find out about the water conditions  before you hike:

Don’t get distracted on the way to the Subway.

Avoid the Crowds.  The Park Service allows a maximum of 80 hikers per day to visit the Subway which doesn’t sound like a lot.  However, the Subway can’t really handle more than a handful of photographers without them getting in each other’s way.  You really don’t want to be here maneuvering your tripod here around 79 of your new, bestest friends.

The Subway is at the bottom of a tall, narrow canyon, so it doesn’t get much direct sunlight.  The light is subdued and my Nikon D800e was able to handle the dynamic range.  However, the D800 is known for its dynamic range abilities, so depending on your camera, it might be a great idea to bracket your shots just in case you have to use HDR software.

I’ve never seen a place like the Subway.  It is truly unique and for the photographer willing to make the hike, it is a place never to be forgotten.

I hope you get to experience the magic yourself someday soon! 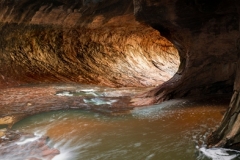 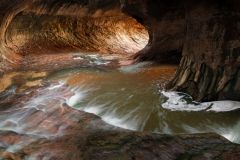 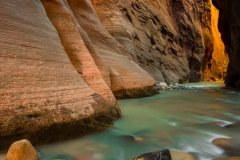 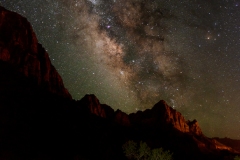 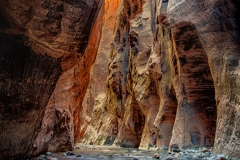