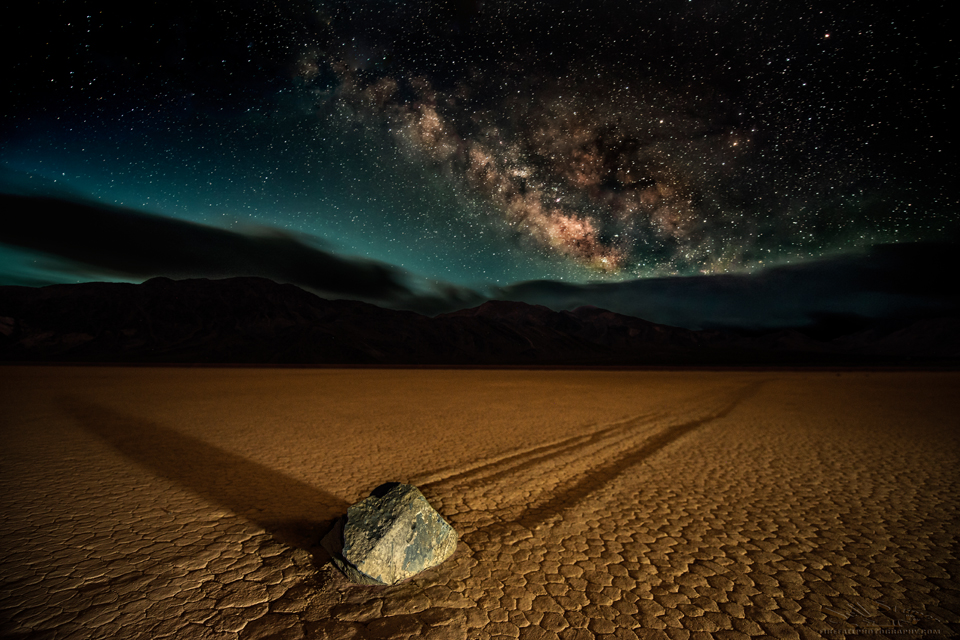 In a recent blog, I mentioned a couple of hikers who made the tough 10 mile hike to reach the Subway at Zion National Park.  They spent five minutes looking at it, then turned around and hiked back.  That got me to thinking (which is a dangerous thing)…would I have hiked to the Subway if I WASN’T a photographer?  It is an amazing place… but honestly… a full day of tough hiking for just a glance.  I don’t know…

So I wondered:  I’ve photographed a number of sites that were pretty challenging to reach…how many of them would I go back to, even if I didn’t  have a camera with me?   To be honest, that list is mighty short, but at the top of it would be Racetrack Playa.

I’ll bet you’ve seen photos of the Racetrack …even if you aren’t familiar with the name (see the image to the left).  The ‘sailing rocks’, some of them hundreds of pounds rest on a vast, flat mosaic of sun-cracked mud with trails stretched out behind them.   Folks have wondered for years how the heck boulders ‘sail’ across the high desert valley floor in a remote part of Death Valley.  Theories covered the spectrum from aliens (probably visiting from their nearby home at Area 51) to some other stuff that was really ridiculous.

Something about the Playa simply fascinated me.  The images of those sailing stones just fired my imagination.  And the Playa itself looks like an image taken from a Mars space probe.

Racetrack Play instantly went on my ‘bucket list’ and I finally I got my chance to photograph it this spring.

Death Valley is the largest National Park in the lower 48 states, covering 5,262 square miles.  My son, Ryan, and I spent our first day doing our best to hit the park’s photographic high points, including:

But I was really there for the Playa and it was the only thing on our schedule for the next day and a half…but first we had to get there.   Now, Death Valley isn’t exactly difficult to visit, over a million folks do so every year.  Getting to the Playa, however,is ‘a whole nother matter.’  I doubt that more than 20 folks per day make it to the Playa and now I know why.  It’s isolated in the far western edge of the park and the only way to reach it is via a ROUGH 28 mile unpaved road. When I say rough, I mean this was by far the worst road I’ve ever been on in my life.  It’s not a simple dirt or gravel road, its a mixture of sand and sharp broken rocks.  The washboarding is incredible and much of the ‘road’ is wide enough for only a single vehicle. Put it this way, the road is only 28 miles long but it took us about 2 hours to reach the Playa…yup, I averaged about 15 mph (and I thought that was fast!)

We had read about the road beforehand and knew we shouldn’t try to get there in a regular rental sedan, so we rented a modified 4×4 Jeep.  It wasn’t cheap, but it had heavy duty tires, beefed up suspension and included an emergency GPS tracker you could activate if you got stuck (no cell service on that road…or most places in the park for that matter).

I thought maybe I was being over-cautious renting the jeep.  I mean how bad could it be?  Well, in the first couple miles we passed two regular sedans that had blown tires and another that had the bottom torn out of it (no wonder the Park Service recommends you take TWO full sized spares).  Apparently towing costs are outrageous …like $1500-$4000… so I started thinking the cost might not have been ridiculous after all!

After an hour and a half of being thrown around like ping pong balls in a lottery cage, we reached Teakettle Junction.  I don’t know how it originally got its name, but over the years folks have decorated the sign with, you got it…tea kettles!  It was worth a photo and the good news was that it meant we were only 6 miles from the Racetrack.

We finally made the last turn and saw the Playa…  As I soaked in the view it became apparent why they call it the racetrack..it really is a huge flat oval surrounded by mountains that look like bleachers…throw up some NASCAR banners and I would have thought I was at the Daytona 500.

We parked when I first spotted some rocks out on the Playa.  They didn’t look that far out there so I grabbed my camera nearly ran out into the flats.   After about five minutes, the rocks didn’t look any closer…so I slowed to a trot…then a jog…and then I just plain walked.  It slowly dawned on me that the Playa is big…really BIG.   Plus the rocks were out a lot further out there than they appeared and of course they were all on the FAR side of the Playa.

But I didn’t care!  I was at the Playa and I had my camera.  I spent the next few hours gleefully snapping away running from one rock to another.  The weather was wonderful.  Temperatures were in the 70s…nice partly cloudy skies and a gentle breeze.  I’d hate to visit in the summer when temperatures top 100° but in March, it was ideal.

The shadows lengthened as the afternoon passed and the photography just got better and better.

Finally the sun slipped below the mountains (the aptly named ‘Last Chance Range’) .  That seemed to spark an exodus as nearly all the other folks at the Playa got back in their vehicles and started back…probably hoping to make it before darkness made a difficult drive into a dangerous one.  But Ryan and stuck around.

We were going to spend the night:  I had my heart set on photographing the Playa at night…hopefully getting shots of the ‘sailing rocks’ with the Milky Way hanging above them.  Since the Playa looked like a scene from a different world, I figured that including the Milky Way would be just be icing on the cake!

The campsite was close…less than a mile away.  It was small, rugged and primitive. No water, no electricity, no bathrooms….no problem.  I had done my research, so we knew what to expect and we were prepared…well, we THOUGHT we were.   What we didn’t plan on was the wind. The mild breezes we enjoyed during the day intensified as it got dark…and then got worse.  We live in Florida so we know a thing or two about wind…heck, Hurricane Matthew just hit a couple weeks ago…but we had never camped in winds like these.  40-60 mph gusts blasted our tent with sand and rocks:  it sounded like we were inside a blender full of gravel.  Needless to say we didn’t sleep much…  After a few hours we gave up, jammed the tent in the back of the jeep and drove back to the Playa.

Clouds had accompanied the wind and the Milky Way wasn’t visible.  At least the jeep was quieter than the tent and Ryan managed to drift off to sleep.  I just stared out the window hoping to see stars.  Around 3am the gale died down and the skies started to clear.  I left my sleepy son in the jeep and headed out onto the flats with my tripod and camera.

There was no moon and it was truly pitch black.  The silence was absolute and profound.  The Playa seemed eerie, empty and endless.  It really should have been one of those moments when I stopped, took a deep breath and appreciated the moment…  But all I could think was: ‘Where the heck are those freakin’ rocks?!’  Spotting them during the day had been pretty easy but in the darkness it proved frustratingly difficult.

The Milky Way was beautiful and clearly visible but sunrise was coming and the skies would soon start to lighten.  I kept walking and the minutes kept rolling by.  My chances of getting a Milky Way shot with the ‘sailing rocks’  were slipping away.

And then I nearly tripped right over one!

I knew I had less than 30 minutes before the stars faded with the dawn.  That sounds like a lot of time to take a picture of a single rock..right?  Well, not really.  To get a high resolution shot of the rock in the darkness, some of my exposures had to be nearly 8 minutes long…so I didn’t have time to a lot of photos.  Plus I had to focus in the darkness (which isn’t fun)…then figure out the best way to light up the ‘sailing rock’…plus I had to take separate 30 second exposures of the faint Milky Way (later I’d merge the photos together in Photoshop).

Sometimes you imagine a shot in your head and wait years to get it but it doesn’t equal your expectations.  But the shot above didn’t disappoint me a bit.

I would have loved to photograph more than one silly rock, but the sky had already started to lighten and the Playa slowly unveiled itself.  As details became visible, I started to faintly make out dozens lots of those silly rocks that had been so elusive in the dark.

The world shifted to shades of blue for twenty minutes or so, then the sunlight reached the clouds and briefly burned them red.

Once the sun broached the ridgeline, the floor of the Playa lit up; 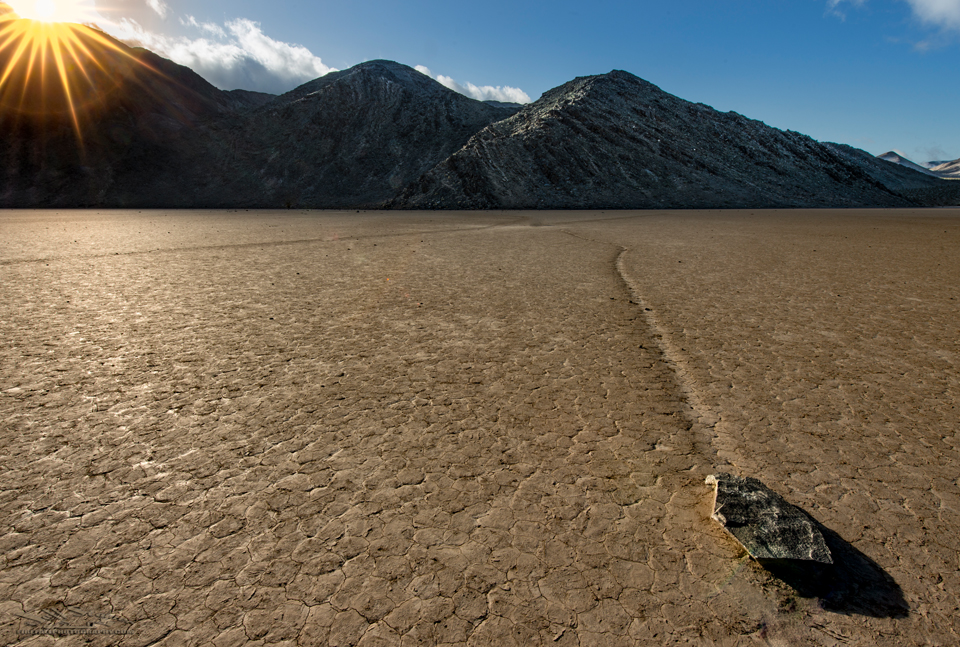 By now Ryan had joined me and we darted around the Playa yelling to each other when we found a particularly photogenic rock.  Some of the trails were truly weird, sharply cutting and darting around like a running back caught behind the line of scrimmage.  Others were straight as an arrow or gently curving…the variety was puzzling and fascinating at the same time.  I caught my self a couple times just staring at the magical and bewitching scene before me…

We had about an hour before the light got harsh which brought an end to our visit.   Ryan and I looked at each other and grinned that smile that guys do when they are really happy but way too old-

school to actually hug each other.  We ambled back to the parking lot, ate a power bar, fired up the jeep and headed back to civilization.

I’m sure some will look at these photos and think  “OK…a bunch of rocks in the desert:  Big Deal”  But if you are like me, it will spark a sense of wonder and enchantment.  I found it totally surreal and bizarre….and starkly mesmerizing.  Despite the time, hardship and treasure it costs to get to the Racetrack, I’d go back in a minute…even without a camera.  There just isn’t another place like it…at least here on earth!

PS:  If you are thinking about visiting Racetrack Playa, I’ve written another blog with maps and specific tips.  Use this link for a full report of all you need to know to photograph Racetrack Playa!

PSS:  The mystery of the ‘Sailing Rocks’ has been scientifically solved (see this link for the full report).  A group of researchers actually put small GPS trackers on some of the rocks and set up cameras to take time-lapse photos of them.  Basically, when a thin layer of ice forms on the Playa, the rocks will move if there is a high, sustained wind (yup…I know about THAT!)   It happens rarely, but they caught it on tape.  I guess someone was bound to have enough time and money on their hands to solve this mystery…but honestly, I kinda liked not knowing.