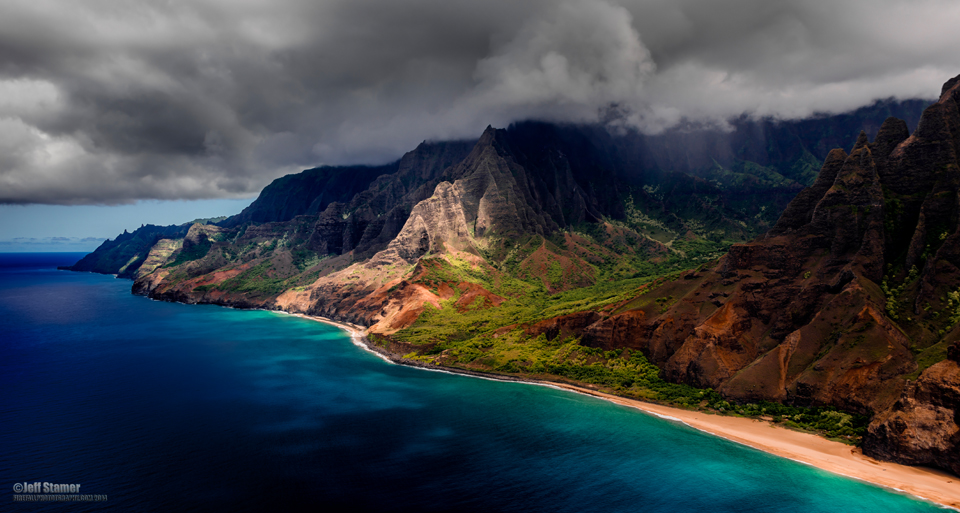 Two of my passions are photography and aviation so it’s only natural that I’ve often combined the two over the years.  To be honest, my initial efforts were not particularly successful.  I learned the hard way that techniques learned for landscape and wildlife photography often just didn’t apply to aerial work.  In this article, I intend to help you avoid that same learning curve by sharing my hard-earned aerial photography tips and how-to guide.

The most critical determinant of taking high-quality aerial photos is to avoid photographing through a window.

Windows cast reflections, magnify glare, and tend to reduce color saturation and contrast.  You can avoid all these issues simply by choosing an aircraft that has windows that open or, better yet, flying in one that has removable doors.  Not only will you get better photographs, but it is a lot more fun!

So…when you call to book a flight, your first question should be:  “Does your aircraft have removable doors or windows that open?”  If they say no, then tell them “Thanks but no thanks!” and call the next company on your list.  Some tour operators will tell you that you can take fine photos thru their big expansive windows which were designed with photographers in mind.  Don’t believe it.  It’s not impossible to get a good shot thru a window, but a significant percentage of your shots will be flawed.

Okay, so what if you don’t listen to my wonderful advice and try to photograph thru a window anyway?  Then here are four things you need to know:

Helicopters vs Small planes, which is best?

If you are in a tourist area (Grand Canyon, New York, Hawaii, etc.) you can easily find aerial tour operators on the internet.  In more isolated locales (or if you want to save some money), do a web search for “Flight Instruction.”  Many of those businesses will take you up for $100-$200 per hour.  Just tell them you want to fly around and take photos (don’t tell them you want to ‘charter’ a plane, that term has a  specific legal meaning that can result in you paying more for the exact same service).

Do some research before the flight

Like most types of photography, ‘the more you plan; the luckier you get.”  If you are going on a tour, check out YouTube and Trip Advisor to see photos taken by previous clients.  I often review Google Earth and Flickr to see what is in the area that we might be able to overfly.  And certainly, ask for your pilot’s input…some of these guys have flown a lot of photographers and have great insight to share.

What time of day should I schedule my flight?

Like most photography, early mornings and late afternoons feature the best light and color.  Additionally, the long shadows seen at those times make for more dramatic shots. Also, keep in mind that some locations look best at one time of day or another.

If everything else is equal, fly in the morning since the air tends to be clearer and the ride a bit less bumpy.

A few thoughts about safety

A DSLR is ideal since you can take multiple shots in quick succession without filling up your buffer.  Don’t get me wrong, a good quality point-n-shoot (PNS) can do fine work, but you’re paying serious money for the flight, so why not take a serious camera?

If you have a second camera, then by all means bring it along. If your primary camera craps out while you are in the air, you can forget about getting a refund from the pilot. This also allows you to shoot with a second lens without trying to change lenses in the air.

On a full-frame camera, I find that nearly all of my aerial shots are taken between 28 and 135mm (if you have a cropped APS-C sensor camera, then the equivalent would be 18-84mm)

The longer your zoom, the more issues you will likely have with vibration.  Rather than use a long lens, just ask the pilot to get closer.

Really wide-angle lenses (10-30mm) aren’t necessary unless you want to include the aircraft in your shots.

Fast Glass.  If you have an f2.8 zoom, bring it.  If not, even an f5.6 zoom will be fine in most circumstances unless it is a very dark day.

Bring the largest, fastest memory card you can afford.  You will take a lot of photos and changing memory cards during your flight is something to be avoided.  Besides, you certainly don’t want to use your precious time in the air reviewing and deleting bad photos!

Put a fresh and FULLY charged battery in your camera before you take off.

The camera settings for aerial photography are probably much different than those you typically use.  Coupled with the fact that it is easy to get excited and forgetful when you are in the air, it’s a good idea to take care of the tasks listed below BEFORE you get to the airport.

A) Shutter Speed.   This is the single most important camera setting for good aerial photography.

Depth of field isn’t an issue, so set your camera on Shutter priority.  Select between 1/500th to 1/1000th of a second (1/750th of second freezes most blur with lenses up to 100mm in length on a full-frame camera).

If your camera/lenses have this option, make sure they are enabled.

Take some practice shots with your camera once you set your shutter speed and determine how low of an ISO you can use and still get a good quality resolution.  If you have good sun, you can often use as low as 200 ISO.

D) Set up your camera’s viewfinder so it shows a grid or artificial horizon.

If you have a good quality DSLR and you are shooting in RAW, then exposure bracketing is something you don’t have to mess with unless you shooting scenes with a truly dramatic dynamic range.

Set your camera on Auto-Exposure.  Most photographers are too busy during an aerial shoot to consider using manual exposure.

Use an “area” or full-frame rather than “spot” metering mode to reduce exposure issues.

Most modern cameras have quick and effective auto-focus capabilities.  I leave my camera on auto-focus for aerial photography.  On the other hand, if your camera’s auto-focus function has a tendency to ‘search’ and takes an eternity to lock in, you could use manual focus and set it for infinity’.  If so, use this old tip:  Before your flight, manually set focus on infinity and use blue painter’s tape (no residue) to hold it in position.  This way, even if your focus ring gets bumped during a flight…you won’t find out later that you have a bunch of out-of-focus shots

If you are a pro or serious amateur, I’m sure you already shoot in RAW mode.  If you haven’t tried it yet, you really should.   RAW shots contain a lot more data than standard jpegs and will give you a LOT more flexibility in post-processing…and even if you currently don’t do much post-processing, you might in the future.  If so, those RAW files will be ready and waiting!

I always use a circular polarizer for aerial photography.  It reduces glare (very helpful when shooting over water) and intensifies colors, especially blue skies.  However, know that polarizers reduce the amount of light hitting your sensor, so to maintain your high shutter speed, you will likely have to use a slightly wider aperture and or ISO setting.

Talk to your Pilot

If you are supplied with a microphone & headset you should take advantage of it!  Most pilots love what they do and will bend over backward to ensure that you have a good time. For example, I noticed the rhythmic patterns in this Alaskan glacier (see below) after we had already overflown it.  However, the pilot was happy to make a second pass. Even tour pilots will often be flexible if you ask nicely.  And even the surliest captains are often thinking of a tip at the end of the flight, which gives you a bit of leverage

Do not rest the camera or your upper body (including arms) on any part of the aircraft.  Doing so will transmit vibration to your camera.

It is normal to be so focused on your NEXT shot that you neglect to check your LCD to see how your LAST shot turned out.  Once over the Grand Canyon I somehow bumped my camera and never noticed that my shutter speed had changed to 1/8000th of a second…which ruined every single remaining shot I took on that flight.   One of those lessons learned the hard way.  Check your LCD often.

When I’m taking a landscape photo, I sometimes spend a full minute making sure the shot is perfectly framed before I click the shutter (my wife says I take an hour).  This isn’t a habit you want to bring along on an aircraft. Frame your photos a bit wide and crop later.

Take Multiple Shots of each subject.

Keep your eyes open for the unusual and unexpected

No matter how much you preplanned, you should be ready for the unexpected!

And once, flying near Disney World, the pilot pointed out “Mickey’s Magical Forest” which I had never heard of, even though I’ve lived near Orlando for over 40 years!

Be aware of Haze

Haze can be a real problem and not just over polluted cities.  Even worse is that you often don’t notice how bad it was until you get home and review your work on the monitor.  Here are some strategies that will help:

If your pilot did his/her best to ensure you got good shots, then spread the wealth baby!

My photoshop workflow for aerial work isn’t significantly different from normal.  However, there are two exceptions:

Now, I know this seems like a lot of information and it might seem intimidating.  But the paybacks can be incredible…unique perspectives and locations you simply couldn’t photograph any other way. Expand your photographic horizons and give aerial photography a try!

…and remember…photography is about more than just pretty pictures!

PS:  If are going to try aerial photography under very low light conditions AND you have money to burn, you might want to consider using a Gyro Stabilizer.  Frankly, I’ve never used one…they aren’t cheap ($1,500 and up) and you really don’t need one under normal lighting conditions…but if you’ve hit the lotto and can rent a chopper to take photos of the milky way rising over a volcano spewing lava in Hawaii, then give it a shot!

PSS:  If you would like to see more of my aerial shots of Na Pali, click on this link.