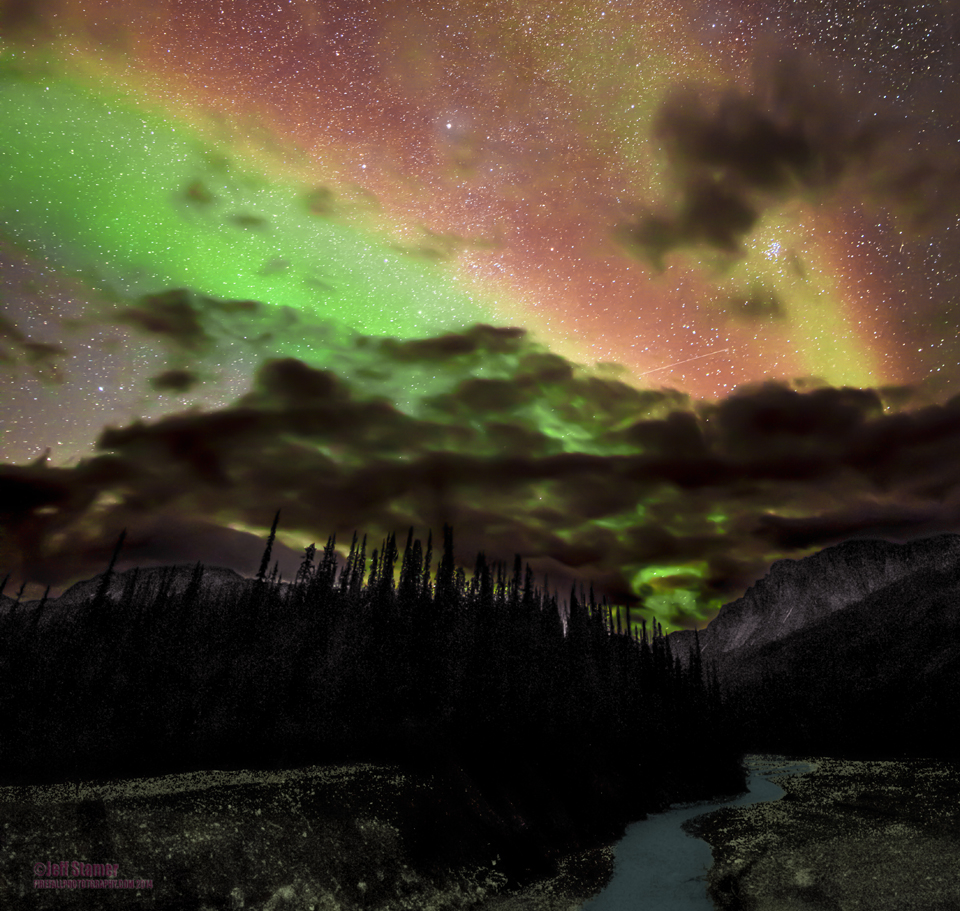 Once, when I was a kid, my family was on vacation in Canada.  We were out on our boat fishing in Lake Huron and the wind came up.  It was blowing so hard we couldn’t make it back to camp and we had to spent the night on the rocky shore.   That night, after my brother and I went to sleep, the Northern Lights came out.  Although we had never seen the Aurora  before, my Mom and Dad didn’t wake us up, thinking we really needed our sleep.   The next morning, the wind had calmed and we were able to get our boat back to camp.  But when I found that I had missed a chance to see the Aurora, I was terribly disappointed .   I carried that regret for the next forty years.

Last month, I got a chance to finally fulfill that childhood wish.   I took a ten day trip to Alaska on a Hugh Rose Photography Tour.  My primary goal was to  see (and photograph) the Aurora Borealis.  In this blog, I’ll share with you some photos and highlights of that experience.

The tour group met for dinner the first night in Fairbanks and our guides (Hugh Rose and Ron Niebrugge) gave us some pointers about shooting the Aurora.  They suggested we get some practice that night, so  I set my alarm for 11pm.  When it woke me up in my nice, warm bed a few hours later, I peeked out my window and saw a bit of green in the sky.  It wasn’t much, but it was an Aurora, my first!  I quickly gathered my gear and walked down to the Chena River, which was no more than two minutes behind my room at  the River’s Edge Resort  .  I quickly set up and here was my first effort: 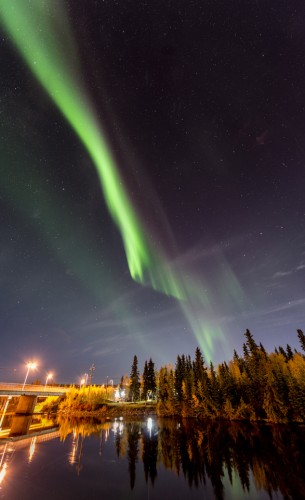 I didn’t particularly like the lighted highway bridge, so I hiked upstream until it was out of sight and found  a spot where the river turned north (toward the Aurora).  This bend made the river look a lot wider, which allowed me to capture more of the Aurora reflected in the water.  As time passed, I noticed that the Borealis gradually increased in size and intensified in color as well. 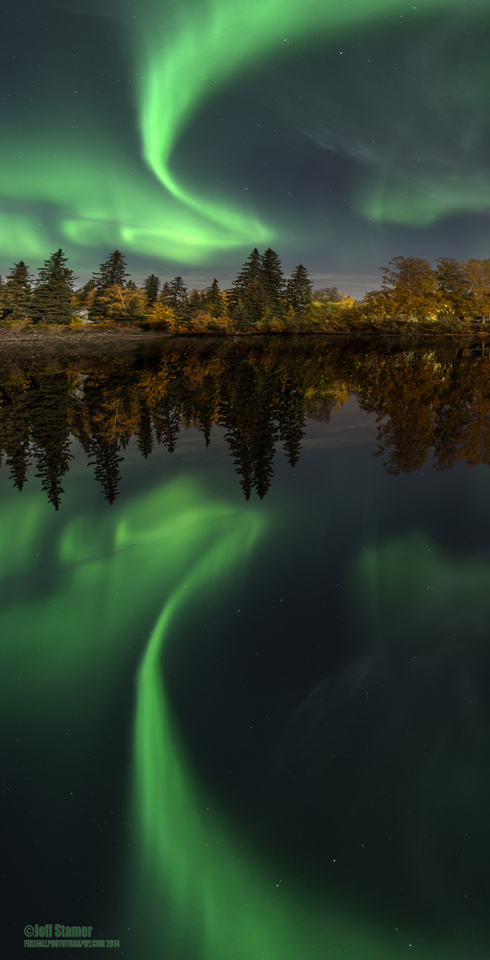 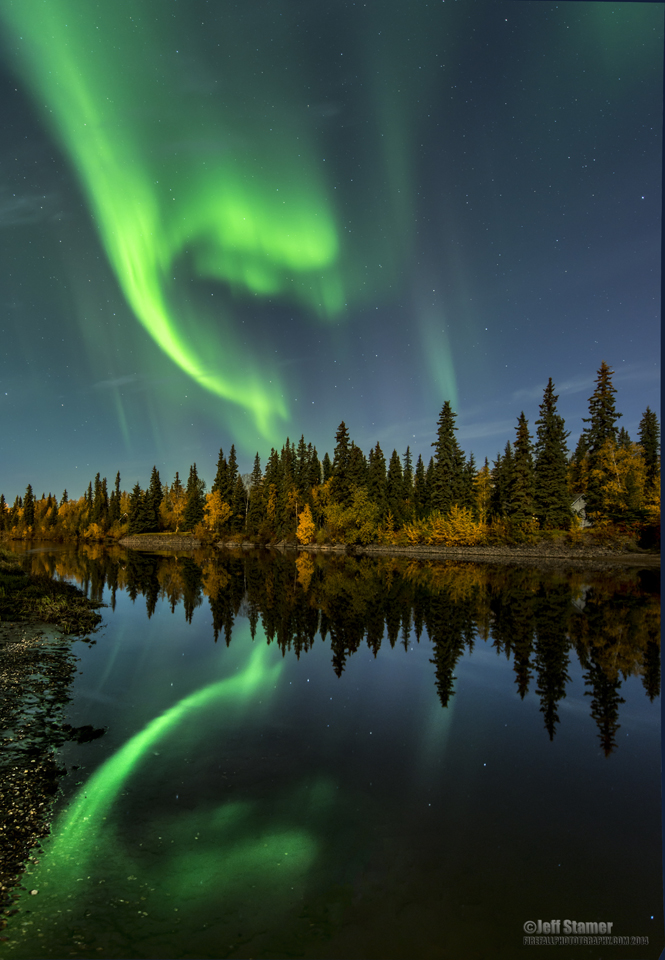 By now it was midnight and for the next three hours I was totally enthralled by the spectacle in the heavens above me. It was glorious.  What really surprised and delighted me was that the Aurora MOVES.  I had seen time lapse videos which showed the Lights moving, but I thought it did so slowly…I didn’t think you could watch it move  with your  bare eyes.  I was wrong.  I stood there in awe as it slowly and sensuously danced across the sky.

There was a full moon, which did a wonderful job of illuminating the trees across the river.  Fall had come to Fairbanks early, so those trees were blessed with a riot of autumn colors as well. The river was flowing slowly and with long exposures, I was able to capture great reflections! 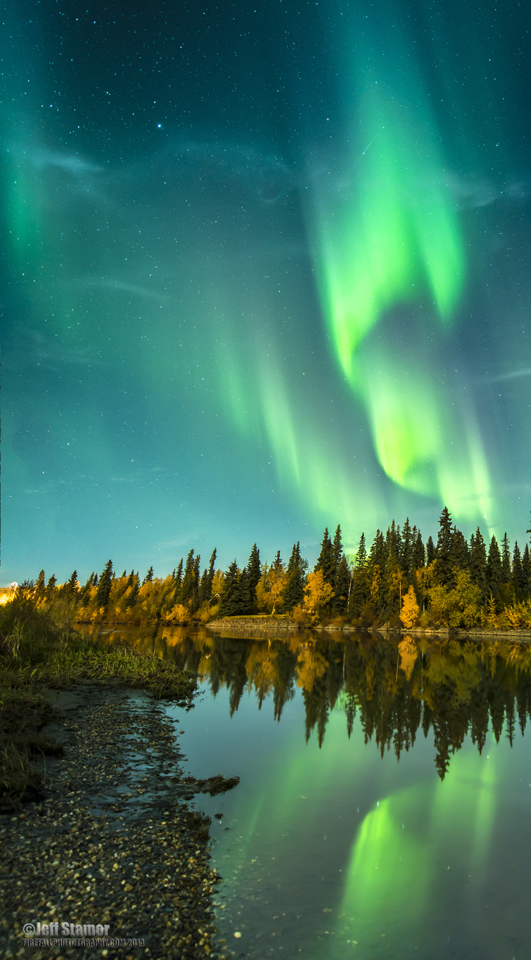 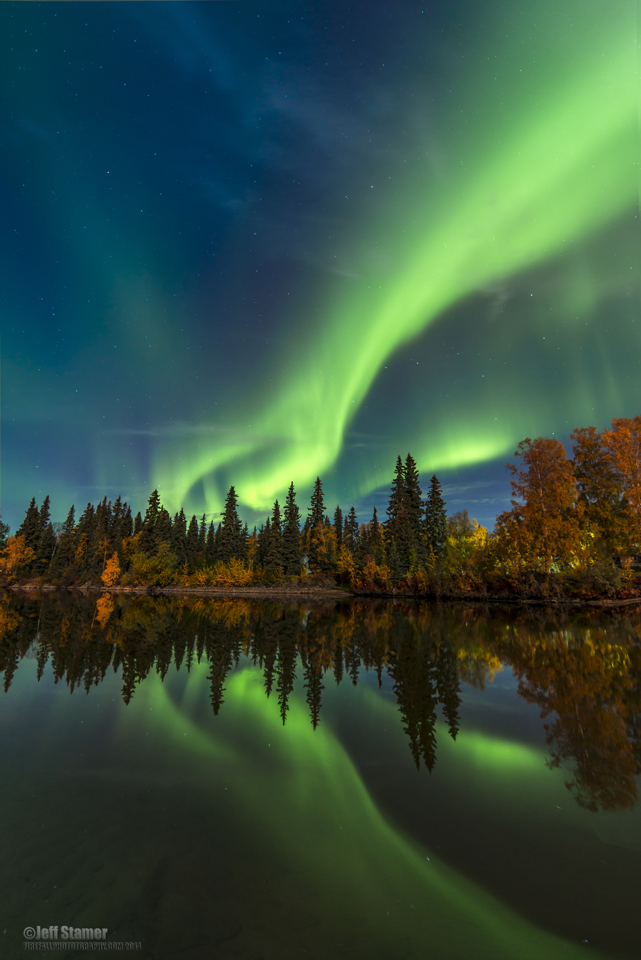 The next morning at breakfast, the tour group was excitedly bubbling about what a wonderful exhibition we had seen the night before.  It turned out that there had been a massive solar flare a few days earlier and it had just hit the Earth’s atmosphere.  And since the Aurora is caused by the collision of solar wind and magnetospheric charged particles, the result was the killer display we had witnessed.

The forecast for the upcoming night promised an even better and more intense Aurora.   Plus, the Northern Lights tend to be better the further north you go and the higher in elevation you are.   Since our plan was to spend the night in Wiseman, which was 270 miles north and at an elevation twice that of Fairbanks, our expectations were thru the roof.    But wouldn’t you know it…as it turned out, the night was pretty much a bust.  The Aurora was pretty wimpy compared to the previous night and to make matters worse, it clouded over as well.

We never did figure out why the Aurora didn’t live up to the forecast.  But the really frustrating thing was that those clouds that had rolled in didn’t leave.  In fact, we didn’t have clear skies for another week.   Fortunately, we had plenty of wildlife to photograph (see my upcoming blog about Polar Bears on Barter Island).

Over the next week, I got up every night a couple of times to see if the weather had broken, but I had no luck.  With the trip nearly over, we were driving back to Wiseman at midnight in the middle of the Brooks Range when I looked back over my shoulder and saw that the sky was clearing…even better, I could see color in the heavens.  Our vans pulled over at a great spot a few miles ahead that Hugh had previously scouted and we piled out to set up our tripods.

I was really excited to see red in the Aurora.  Red is considered rare compared to the more common green shades I had seen the week before.  I rushed around to find foreground elements and leading lines I could use.

While the other folks pointed their cameras north, where the Aurora was most visible, my attention was drawn the opposite direction toward the Milky Way.  I love Milky Way photography and I  thought : “Hey, wouldn’t it be cool to get the Aurora and Milky way in the same shot?”  I laughed to myself…what would the chances of that be?…

A few minutes later, the gods answered my prayer and a wide band of the Lights swung far to the south.  I excitedly fit it all in my viewfinder and got off a few shots before the Aurora shifted out of the frame.

By now, the Aurora was starting to fade…as were the photographers.  We got back in the vans and headed for Wiseman.  As it turned out, these would be my last shots of the Northern Lights,  those darn clouds showed up again obscuring the skies for my last couple days in Alaska.

As I flew home, I reflected on a wonderful trip.  I had got to see the Aurora Borealis…and it was far more beautiful and impressive than I had imagined.  I had also captured dozens of photos that would help keep the memory alive over the years ahead!

A Childhood Dream Come True;  Seeing and Photographing the Aurora 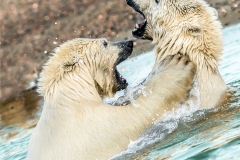 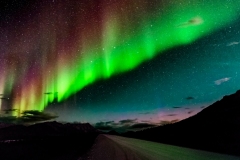