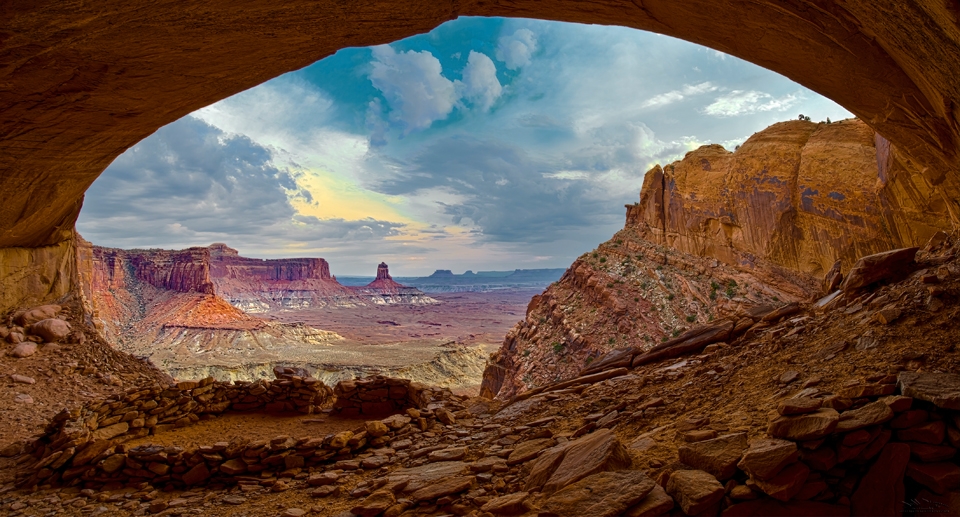 Due to repeated instances of vandalism, the National Park Service no longer allows visitors to enter False Kiva.  You can still use the hiking trail to the entrance of the alcove that contains False Kiva, but you can go no further.  This restriction was put in place in fall of 2018 and there is no indication when or IF it will be lifted.  Unfortunately it only takes a handful of immature morons to make it impossible for the rest of us to be able to enjoy treasures like this.  I fully understand and support the action of the Park Service but it saddens me to think that I may never again be able to enjoy this vista.

False Kiva is one of those locations instantly recognizable to most landscape photographers.  And with good reason!  It has it all:  Indian ruins framed by the opening of a cave on the edge of a cliff that looks out upon a magnificent desert landscape stretching out to distant mountains on the horizon.  It is also kinda spooky…well, that’s not technical term, but it is accurate.  Unlike most of the icons I’ve photographed that are technically beautiful, but serene, False Kiva has a definite ‘vibe.’

My son Ryan and I hiked to the Kiva this summer.  As we threaded our way around a rock outcropping we caught our first glimpse of the kiva high on the cliff to our right.  But it wasn’t empty.  There was a tall, almost spectral figure…bald, light-skinned and shirtless glaring intently down directly at us.  We were too far away to see facial details (assuming there WAS a face)…but judging by the body language, it clearly wasn’t happy to see us.    Ryan’s  internal ‘heebie-jeebie’ radar immediately got the hairs standing up on the back of his neck.  His next move, seriously, was to find a sharp rock that he could use as a weapon..actually, two rocks, one for throwing and one for hitting!  I have to admit, I was bit spooked myself…I hadn’t really expected to see anyone else at the site…and we were in the middle of nowhere.

We continued the climb toward the kiva, always looking up toward the entrance to see if we could spot the occupant again…but we saw nothing.  As we made the last turn and approached the entrance we strained our necks to look inside.  It was empty.  Ryan and I just looked at each other and then s-l-o-w-l-y turned and stared out at the trail we had just climbed.  There was only a single way in or out.  Even a mountain goat would have broken its neck getting out of the kiva any other way…but the fact remained we were alone.  And confused.  We looked at each other again, shrugged our shoulders and laughed that stupid chuckle that men do when they are confused and alarmed but are too macho to admit it.

We never did figure out what happened to the “person” we saw.  I started calling him the “Crazed Kiva Killer” which Ryan thought was funny…but he didn’t put down those two rocks until we got back to the car a couple hours later.  True story.

You might not have the same unsettling experience my son and I did when you visit False Kiva, but if you read blogs of folks that have visited it, they all seem to have an emotional reaction to it.  And I have to admit, even though I’m a pretty non-emotional, logical,  ‘”just the facts, Ma’am” type of guy…False Kiva is one of the few locations that struck an emotional chord in me.  Far more so than Yosemite, the Grand Canyon, or any of a number of far more famous landscape icons.  It truly is a serene site.  Beautiful, yes…but one that is more than just pretty…one that speaks to your core.

Photography is about a lot more than just pretty pictures,