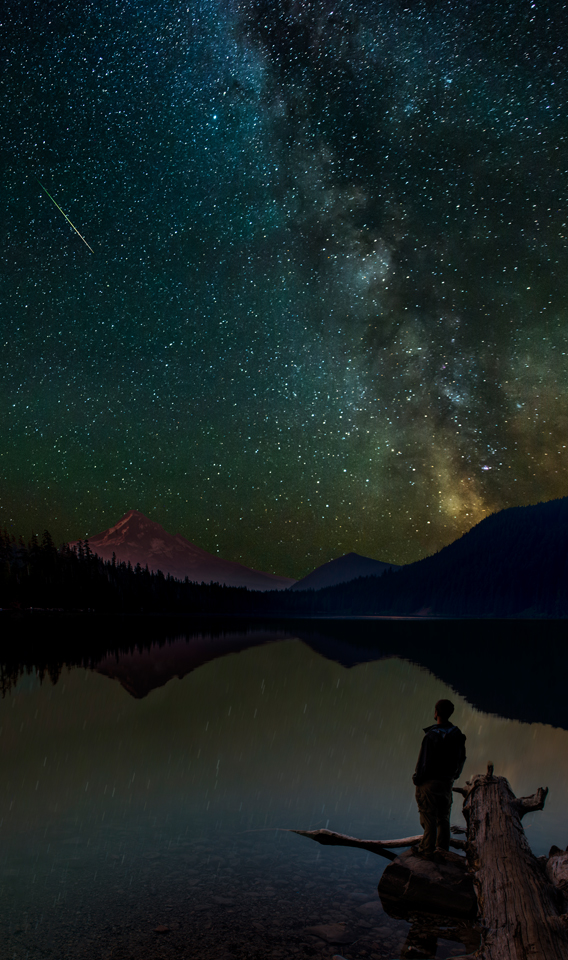 Have you ever seen the excitement in a child’s face when she experiences something for the first time?  Seeing that joy and hearing those squeals of delight are one of the things I most love most about children.

As we get older, we tend to get jaded and take much of life for granted.  Those moments of childlike happiness become a rare thing.  Which is one of the reasons that I adore photography….it continually challenges me to seek out new locations and experiences and helps keep the child alive in me.

For, example, earlier this year my son Ryan and I were planning a trip to Oregon.  While talking with one of my friends in Portland, he mentioned that the Perseid meteor shower would be peaking when I was visiting.  Now honestly, I had vaguely heard of the Perseid’s before, but neither Ryan or I had ever even seen a meteor, much less photographed one.

But a quick search on Google educated me:  The annual Perseid meteor shower is probably the most popular one of the year.  When the Earth crosses the path of Comet Swift-Tuttle in late August, debris from the comet cuts thru our atmosphere at 130,000 miles per hour sometimes resulting in dozens of meteors per hour.

Well that certainly sounded like something I wanted to see!

But where in Oregon would be best to photograph this spectacle?  I wanted a spot with great views (of course) and little light pollution.  After some research on the internet, I decided to split my time between two locations in northern Oregon’s Cascade Mountain range: Trillium Lake and Lost Lake.

Well, we got to Trillium Lake on Aug 10th right after sunset.  And the sky was overcast.  Couldn’t see a single star.    Killed a couple hours eating dinner (and drinking great local beer) then went outside to check again.  Clouds.  Went to bed and got up two more times to check.  Clouds.  The sky did start to clear up just before sunrise so Ryan and I went down to Trillium and captured some shots, but by then it was too bright to see meteors.  Just the same, it was a quiet, peaceful sunrise.  Trillium Lake is an idyllic spot and it is easy to visualize how incredible photos can be taken here..

After a day exploring some incredible waterfalls in the Columbia River Gorge (another post about this adventure later) we pulled into Lost Lake late in the afternoon and set up camp in our Yurt.  What’s a yurt you ask?  Well, when you make reservations at a popular campground only a month in advance during peak season, a yurt is likely to be the only thing left available. Like I said, photography helps me have new experiences…

I had pre-scouted the area on Google Earth and knew I wanted to photograph the meteors from the north-western shore (Lost Lake is shaped like a triangle, and the northwestern shore faces Mt. Hood).  What I couldn’t see on my computer was that trees grow right up to the shore blocking your view of the sky, not exactly ideal for sky photography.  But there was one strip of shore, maybe 100′ long that was perfect: overhead it had a clear stretch of sky and below in the shallows of the lake were wonderful boulders and fallen trees that made great foreground subjects.

Except for one little problem…a group of folks were already there enjoying a bonfire.  So Ryan and I hiked up the shoreline vainly looking for a decent alternative location but we had no luck.  We returned to a spot near the original location and made the best of it, but the light from their fire played havoc on my shots.  Their party finally wrapped up by 11 pm and as their fire faded out, the views of the stars and meteors reflected on the calm lake became more visible. 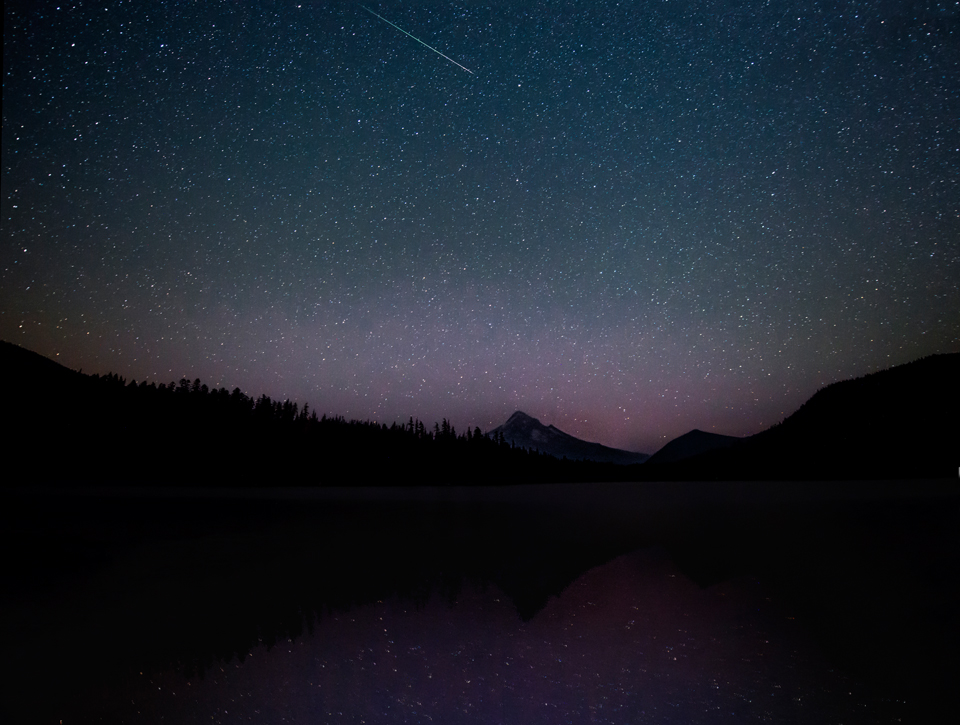 But my heart had been set on taking shots of Mt. Hood with the Milky Way behind it.  Unfortunately, by this late hour the rotation of the earth had moved the Milky Way so far to the west that I couldn’t fit it into the frame with Mt. Hood.  Plus I had hauled my not-so-young body around for miles that day and I was exhausted, so headed back to camp with hopes of better luck the following night.

The next morning, we went back to watch the dawn.  No wind, no clouds, (no bonfire!)…it was one of the most perfect scenes I could imagine. 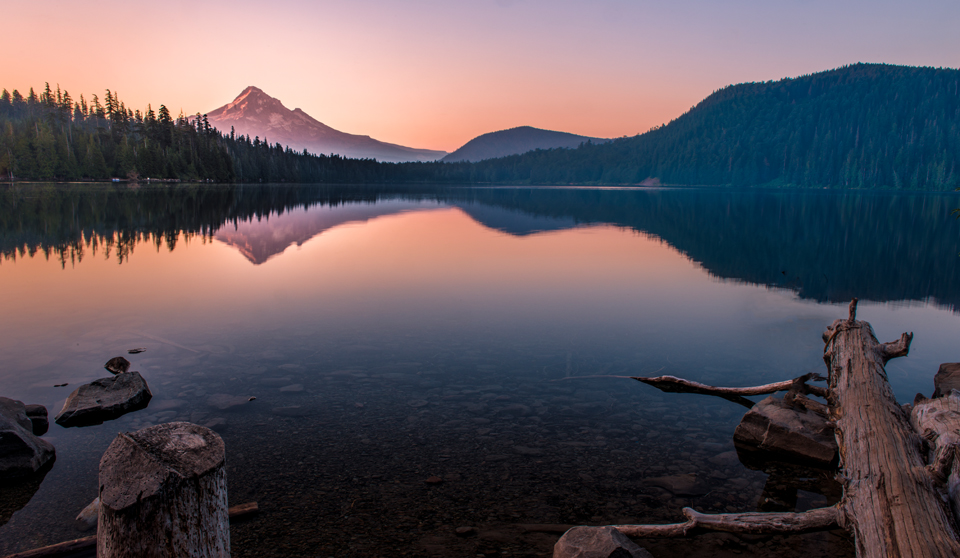 After a few shots, we hit the road early to go hike more waterfalls but drove back to Lost Lake well before sunset to get ‘first dibs’ on our spot.   As the clearing came into view we were happy to see that we were the only ones there, so we set up our equipment, set back and relaxed while we waited for the show to start.

It turned out Ryan and weren’t the only photographers that knew about “our” perfect spot.  Over the next couple hours, four more shutterbugs (who had also previously scouted the area) set up next to us.  They knew that the peak of the meteor shower was going to be that night (Aug 12) and had all traveled to Lost Lake to capture images of it.

Actually, this is one of the things that Ryan and I like most about photography…meeting and getting to know other photographers.  Most of them love to talk about their hobby and share their knowledge and swap stories.  One of the guys, Dan Duerden, was a High School teacher from British Columbia who was spending his 3 month summer holiday on a photographic journey through the PAC NW.  Dan is an incredibly talented photographer and you can see more of his work on his Instagram page: https://instagram.com/dduerds/ .  Ryan had recently started posting his own photos on Instagram (https://instagram.com/ryanstamer/)  and the two of them had an animated conversation about that topic…it was all way over my head.

There was a retired guy obsessed with photography (not that I’m throwing stones!).  Along with him was his long suffering wife who described herself as his “Sherpa” because she got to lug around all of his gear.  When Ryan heard that, he playfully elbowed me in the ribs…. because he is my designated tripod-carrier on our hikes.

Anyway, we spent the next few hours taking our photos and quietly talking on the edge of the shore.  We watched the sky…and listened to the “Ewwws!” and “Ahhhs!” from the campers on the other side of the lake as meteors streaked across the heavens.

I had two camera set up to automatically take continuous photos.    This ensured that I would capture nearly every meteor that flew over our heads.  It also gave me the chance to try my hand at making a time-lapse video.  The resulting ‘film’ condenses about 600 photographs down to less than 100 seconds, take a look:

In addition to the meteors, you can also see a number of aircraft and satellites in this video, but basically, anything that you see for less than a half of a second is likely to have been a meteor…and there were a bunch!    This is my first ‘real’ time-lapse and I’m still learning…but it was a lot of fun and I’m pretty happy with the result.

There weren’t a lot of meteors early in the evening, but they appeared with increasing frequency as the hours went by.  Just the same, of the 700+ frames I took over two days, there was only a single image that captured two at the same time:

Note how the meteors are multi-hued, plus they tend to be wider toward the center.  I learned that these attributes help you distinguish them from satellites or aircraft.

I really loved the way the Milky Way arched over the entire lake.  It was too wide a view to capture in a single shot so I stitched five frames to make a panorama: 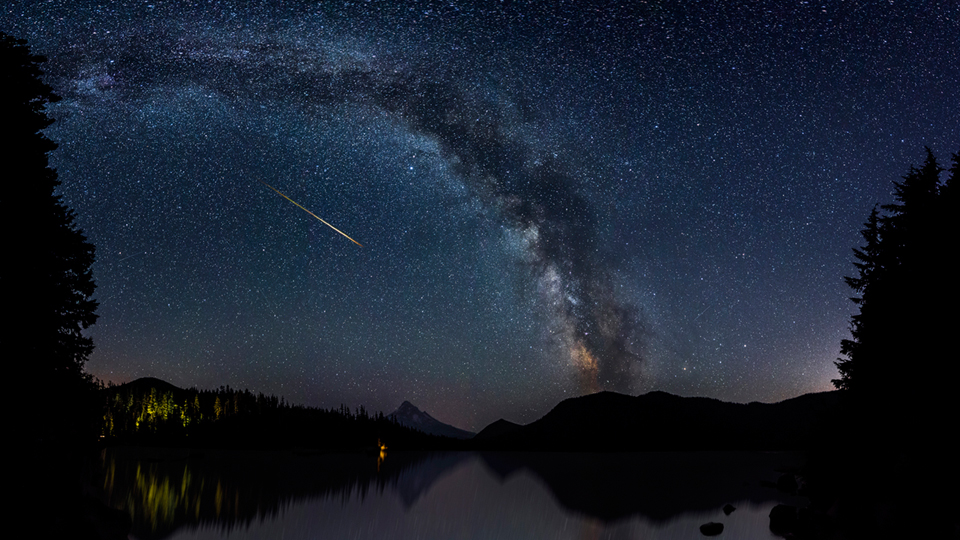 Here is one last shot I’d like to share.  Basically, I took most of the decent sized meteors I photographed on Aug 12 and placed them on a single image.  I had to reorient some of them to take into account the rotation of the earth (since we saw the meteors over a 3 hour span of time).  It certainly makes for an interesting image:

By 1 am Ryan and I were yawning and since we planned to be hiking again in a few hours we thought it might be nice to get a bit of sleep first.  We said goodnight to our new friends and headed for our sleeping bags.

Over the next week or so, Ryan I spent time at a number of amazing places in the PAC NW, but our time at Lost Lake has become one of our favorite memories from the trip.   It kind of reminded us of one of those old-time fishing camps nestled way back in the woods. The area is truly beautiful, peaceful and seems to do wonders for your soul.

Plus, I got to have some NEW experiences.  Yeah, maybe I didn’t exactly squeal like a child, but it made me feel young just the same.

PS:  If you go to Lost Lake, here is a map showing the spot we “found”: 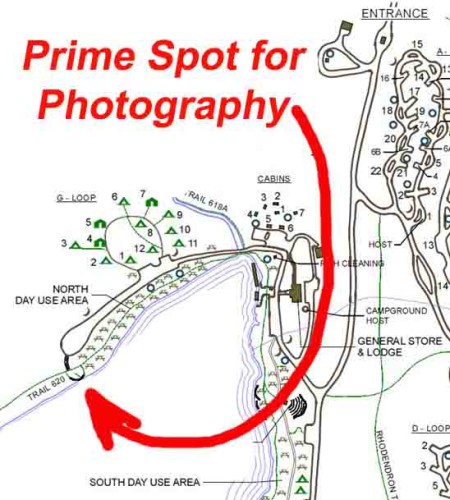