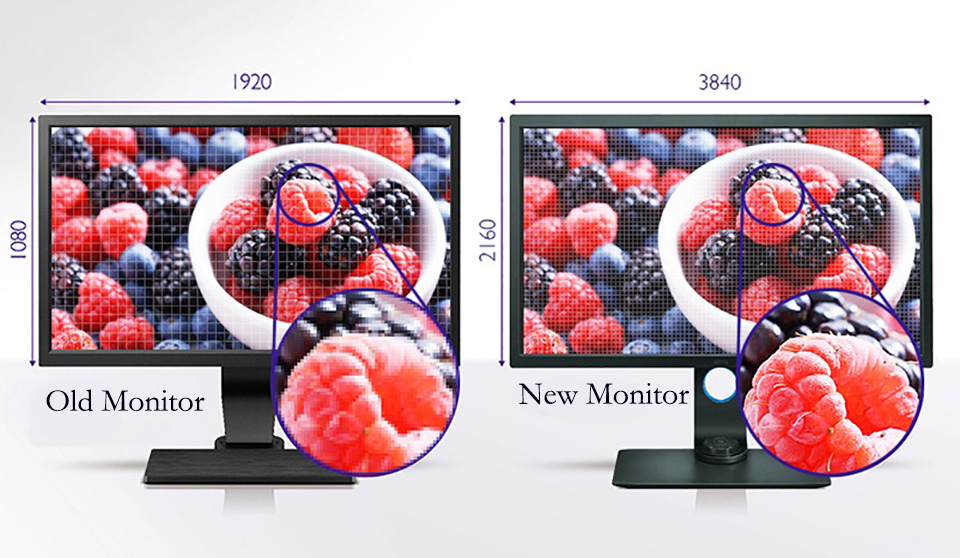 Photographers are well-known equipment junkies and gear-heads.  I’m certainly guilty.  God only knows how much stuff I’ve bought over the years…but to be truly honest, it’s rare for any new gizmo to provide anything more than a minor or incremental improvement.

There have been two exceptions.  The first was when I bought a Nikon D800E.  That incredible camera had a 36 megapixel sensor, which was a 3x improvement over my old (and beloved) D700.  I would pull up new photos on my monitor and exclaim “Holy Crap” (well,  something like that)…truly, the improvement in resolution and the resulting amount of detail was absolutely staggering.

The second exception just occurred this month.   It was a complete surprise to me because I was just replacing an old piece of equipment that had busted and I didn’t really expect the new item would be all that much better.  Basically, my monitor died on me and I had to get a new one.   Before it broke I had read about the new 4K monitors but thought my old one got the job done and didn’t think there was a good reason to upgrade.  Well, I was wrong.

My new monitor is about the same size as my old one (27″…although this really means about 19″ wide).  The difference is the resolution.  My old monitor had a resolution of about 1920 x 1080 pixels.  My new BenQ SW 271 has twice the resolution (3840 x 2160).  Which sounds nice, but so what?  Well here’s the thing, modern cameras have incredible resolution.  My current Nikon D810, for example, produces images that are 7360 × 4912 pixels.  So when I was looking at one of my images on my old monitor, it could only display about 25% of the actual resolution contained in my image…my new monitor displays twice as much.  See below.

Ok, but what does that really mean to a photographer?

Put it this way, I have a portfolio that features the cream of my work…150 shots or so that I use to ‘wow’ my clients.  Since I got the BenQ, I’ve had to rework nearly 20% of those shots because of imperfections I had never seen before.  Keep in mind, these images were the absolute best I had…with countless hours devoted to making them (I thought) flawless .  When I first saw them with the BenQ I was stunned.  Flaws, artifacts and issues jumped off the screen that I simply hadn’t seen with my old monitor.

Not only was the resolution a revelation, but the color accuracy was as well.  I have calibrated my monitors for years to ensure accurate color but even with calibration, most monitors can’t capture the full range of colors.  The BenQ can display an impressive 99%+ of Adobe RGB colors which means you can really see all the colors captured by your camera

Again, so what does that really mean to a photographer?

Well, in my case I had never noticed before that my photos appear over-saturated on the web when viewed via Internet Explorer.  In other words, the same photograph looks significantly different if one source is the web (via Internet Explorer) and the other is one of my internal files.  Why?  Because Internet Explorer often fails to use the correct color space a photo was processed with.  And if you use the wrong color space, the colors can be messed up (I use Adobe RGB as my color space and my images look fine on other browsers, like Chrome or Safari).  My assumption now  is that my old monitor’s inability to show the full color spectrum effectively hid  the over-saturation issue I now can see on Internet Explorer.  As a professional photographer, it was mind-blowing that the 15% or so of the public that use Internet Explorer as their web-browser were seeing nearly cartoonish versions of my work (I’ve since switched over to Chrome as my personal browser and taken steps to address the issue for those of you that use Internet Explorer).

Now perhaps most of you are way ahead of me and have already invested in a 4K monitor.  But my guess is that although photographers are ‘gear-heads’, we tend to concentrate on cameras, lenses, tripods and the other ‘fun’ stuff and only spend what we absolutely have to for the ‘boring’ items like computers and monitors.  If that sounds familiar and you have top-notch equipment, display your work on the internet and/or sell large prints, you might want to learn more about 4K monitors.  I wish I had years ago.

PS:  The reason I wrote this article was to highlight the advantages of a 4K monitor for professional photographers.  This isn’t really an equipment review, you can check out the web for those.  Plus, this isn’t a product testimonial.  To be honest, I had never even heard of BenQ before my old monitor broke, but my internet research indicated the specs were excellent, the reviews were solid and the price was significantly lower than the competition.  And to ensure total transparency, BenQ didn’t give me money or a price break on my monitor….darn it.