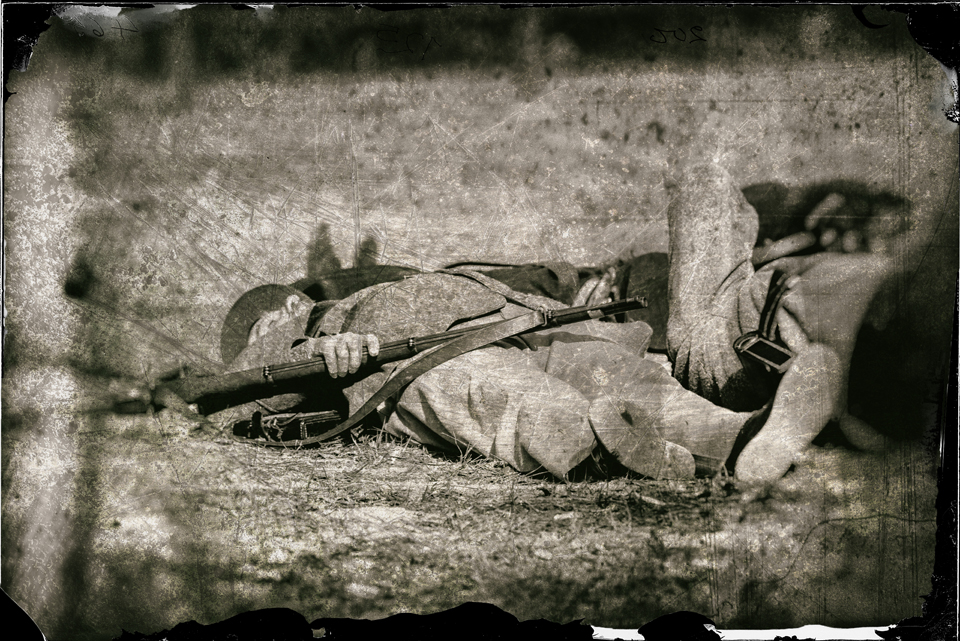 I have always been a man with wide-ranging and varied interests.  Photography, woodworking, history, scuba diving, archeology, impressionist paintings, Victorian architecture, you name it…I probably love it, collect it or do it.

So it shouldn’t be a surprise that although I truly love photographing landscapes and wildlife, I actually enjoy pointing my camera at other subjects on occasion.  For example, my love of history and photography merge when I photograph a Civil War reenactment.  I know, I know…folks hear ‘Civil War Reenactors’ and their heads will turn a bit sideways and a twisted little smile sneaks onto their faces.  But the reenactors I’ve spoken to over the years don’t strike me as odd…just impassioned.  And since I’ve been accused of being overly impassioned on occasion I’m not going to cast stones!  I attended my first reenactment about 5 years ago when the boys in my Scout Troop wanted to see the local “Battle of Townsend’s Plantation.”  The guys enjoyed it so much it became an annual event for the Troop…and being a shutterbug, I always took my camera along.

Over the years, I’ve experimented with ways to make my photos look like those created in the Civil War by one of my personal heroes, Mathew Brady.  Brady (1823-1896) was a successful portrait photographer during the early days of American photography.  When the Civil War started, he dug into his pockets (to the tune of over $100,000) and sent over 20 assistants into the field in an ambitious and inspired effort to document the war in photographs.  The results both excited and shocked the American public.  It forever tarnished the idealized concept of a ‘glorious’ war.

As The New York Times put it, Brady and his team did “something to bring home to us the terrible reality and earnestness of war. If he has not brought bodies and laid them in our door-yards and along the streets, he has done something very like it.”

He would justly become known as the Father of Photojournalism.   But this recognition came at a high cost.  The project bankrupted Brady, who would eventually die alone and penniless.  But his images lived on and have become part of the American soul.

The U.S. National Gallery has most of Brady’s original photographs.  What is even better is that they are posted online and you can easily see them:  just click on this link.

When I first started taking photos at the reenactments, I would convert them to black and white and then add a sepia wash to make them look ‘old.’  But I wasn’t happy with them…they just didn’t look ‘real.’  So I first started researching how Brady and his associates actually took their pictures in an (obsessive) effort to make my shots look realistic.

I learned that Brady used what  is called the  ‘wet plate’ or collodion process which used a large heavy camera.  This system required the people being photographed to remain still for 4-10 seconds (which is why you never see ‘action shots’ from the Civil War).  The image was actually exposed onto a large plate of glass and it had to be developed within fifteen minutes, which meant the photographer had to have a portable field darkroom with him.  The developing process was detailed, intricate and unforgiving.  To make matters really interesting it also used dangerous chemicals (like cyanide!)  The resulting photos often had sections out-of-focus, shaded edges, faded areas and sometimes even fingerprints!  The glass plates often broke after being developed, resulting in photos clearly showing fractures and chips (‘restorers’ later taped broken plates back together with clear tape…which you can see on some photos).  Brady and his assistants  scratched numbers into the plates to log where and when the photo was taken (these numbers often appear backwards on the final photo).  Once on photo paper, the images could fade,  get spotted, folded and torn.  The result is a very distinctive ‘look.

For example, here is an original Mathew Brady photo of a hospital near Washington DC taken in 1863: 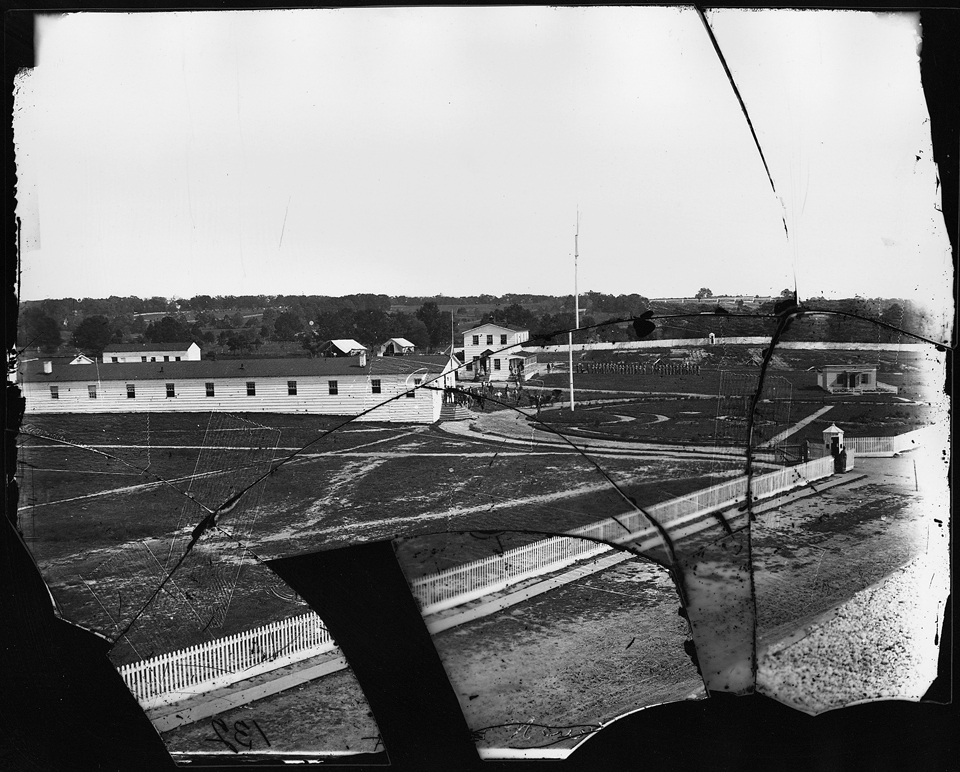 Over the years, I have learned how to process my original photos in ways that reproduce the imperfections of the wet glass system.  I then add scratches, dust and discolorations to resemble aged photo paper.  Finally, I create the effects of flawed glass plates by painstakingly reproducing the cracks and chips found on original Brady photos stored in the U.S. National Archives.  For example, here is a shot I took a few weeks ago…compare it to the original Brady photo above:

What do you think?   Being obsessive, I’d never say anything I’ve created is ‘perfect’ but I think I’m getting pretty darn close.

It’s kinda ironic…I spend hours on my landscape and wildlife photos removing each and every imperfection…and here I do my best to do the exact opposite:)

Here are some of my other ‘Bradyesque’ efforts: 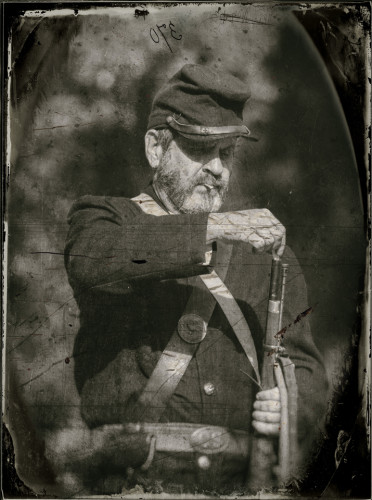 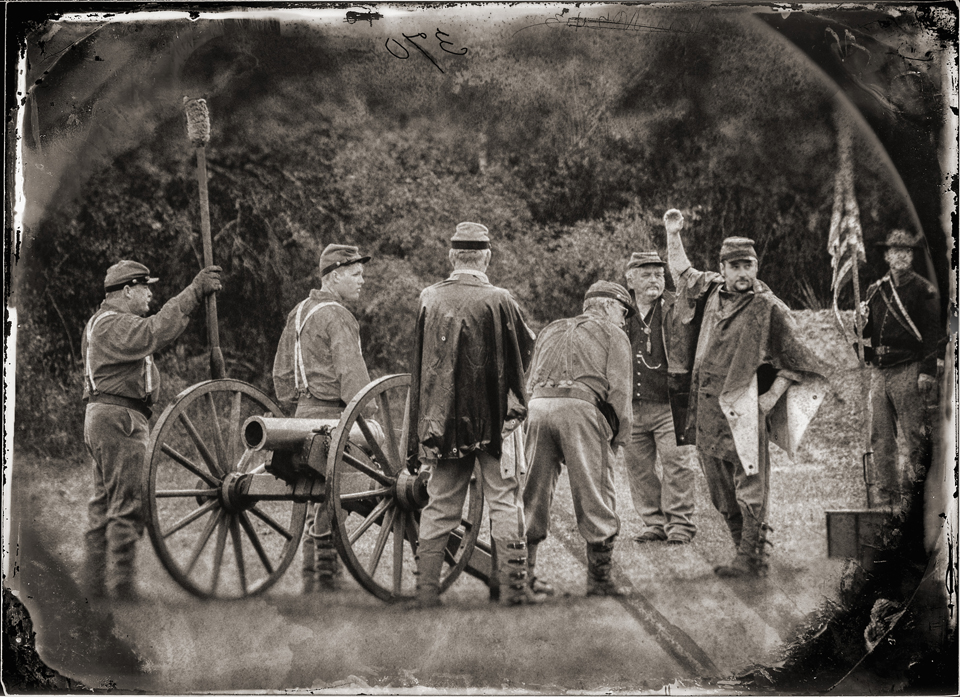 One advantage to using a modern camera is that I can photograph moving figures (which would have appeared as blurs on a wet plate photo).  It isn’t historically accurate, but if Brady had cameras available that could freeze action, I’m pretty sure he would have used them ecstatically.   The shots below are the type I imagine he would have taken… 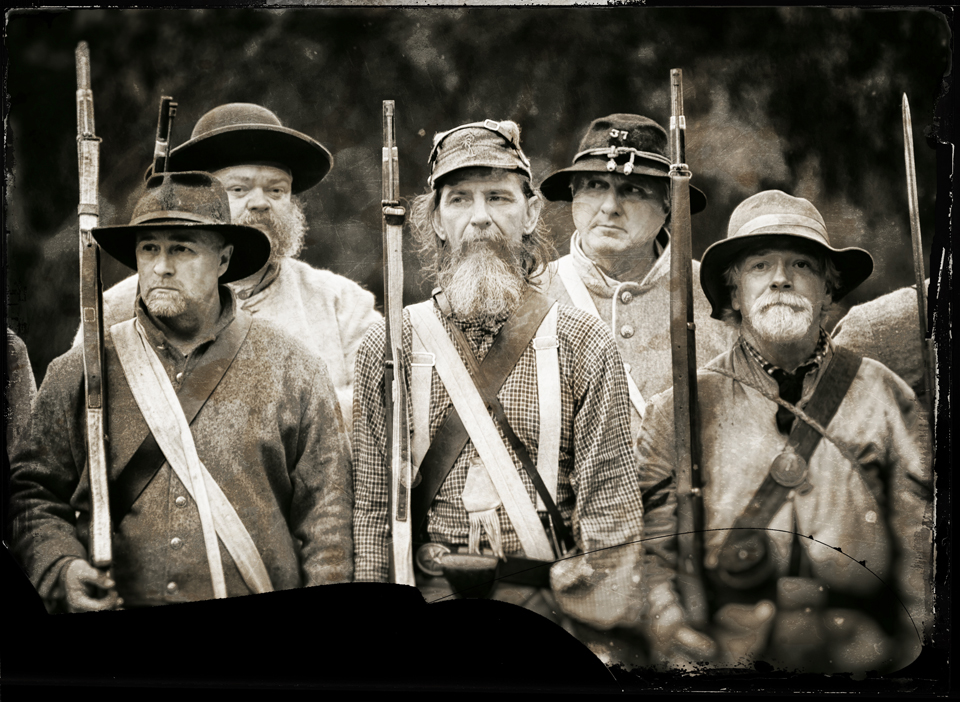 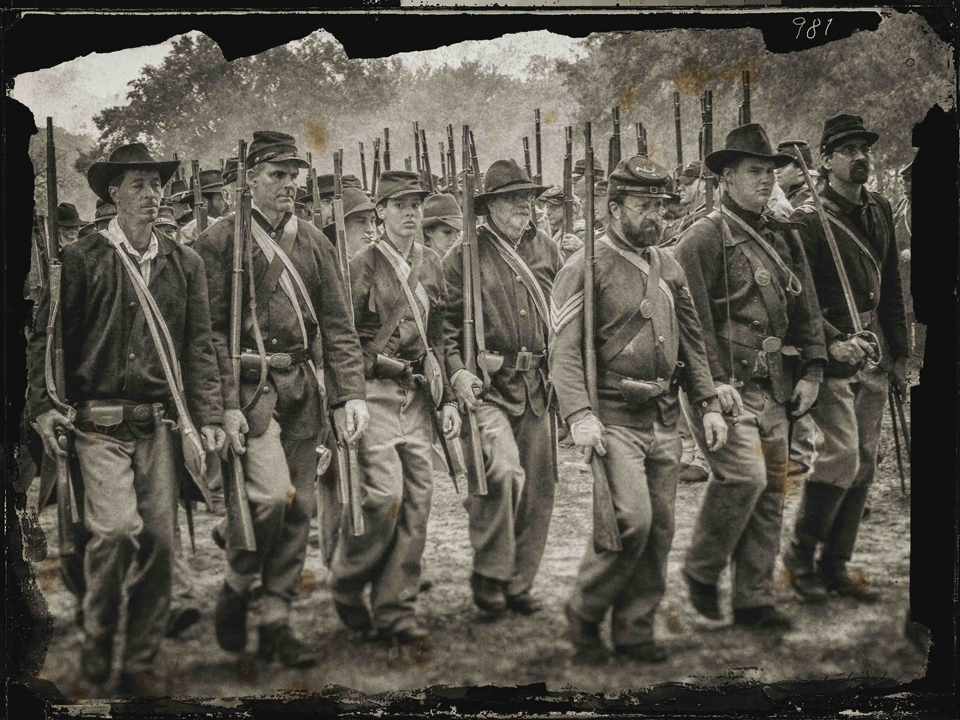 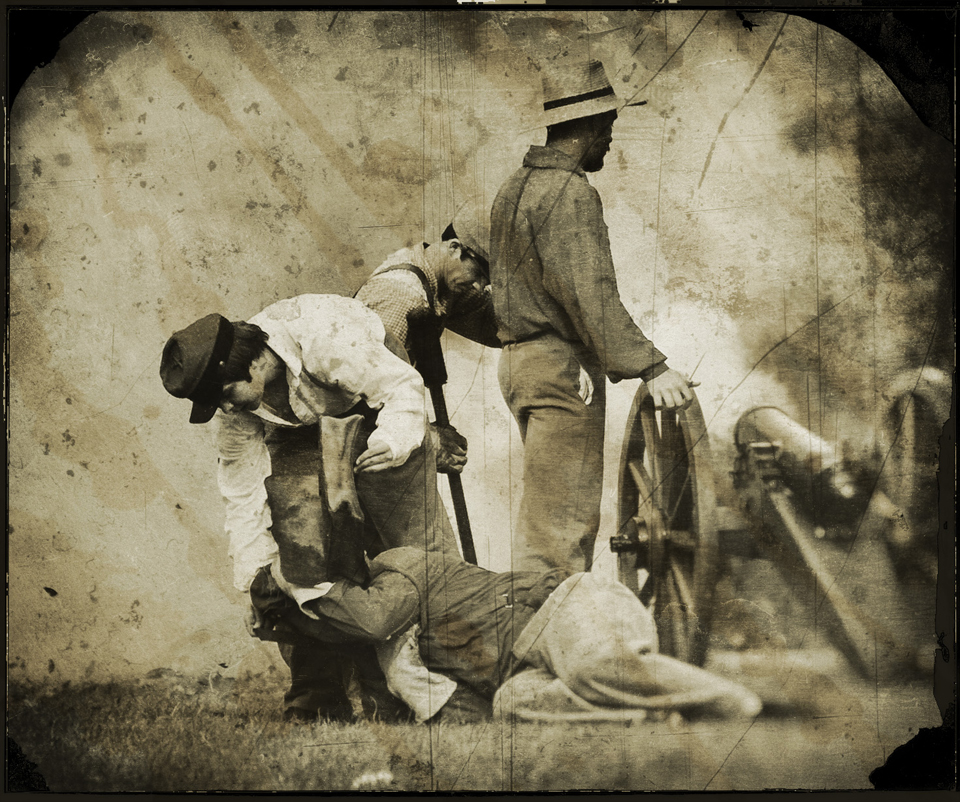 Believe it or not, some guys, like Robert Szabo,  actually still use wet plate photography.  I admire that kind of devotion, but it’s not for me.

Anyway, thanks for letting me indulge in this little tribute to Mathew Brady.  My blog will now return to my usual subjects of (modern) landscapes and wildlife.  But we should never forget that photography can be so much more than just pretty pictures…as Brady once said, “the camera is the eye of history.”

PS:  I rarely see sharpshooters at these reenactments, here is a lucky shot I got of one at the Battle of Townsend’s Plantation last month (Ed Rosack, is that you?): 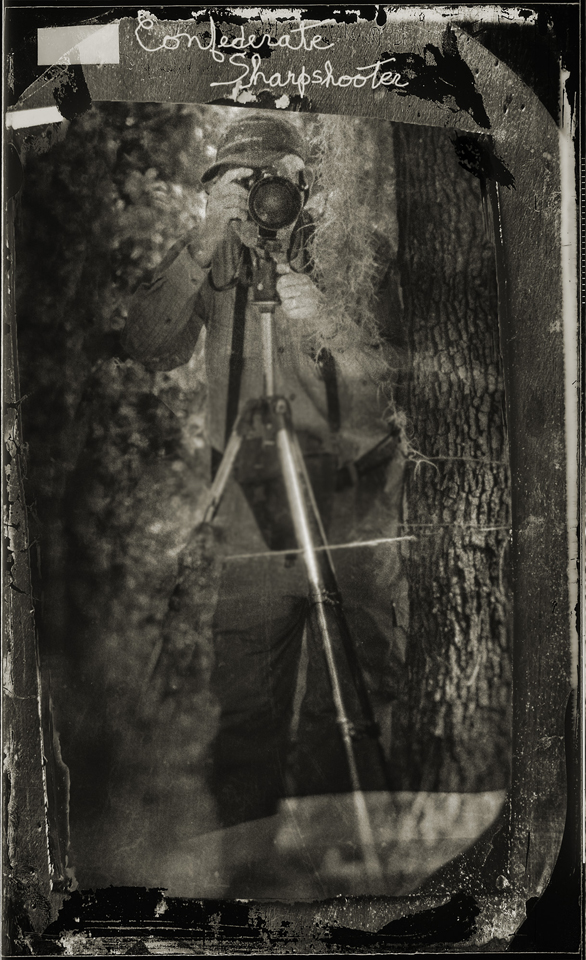