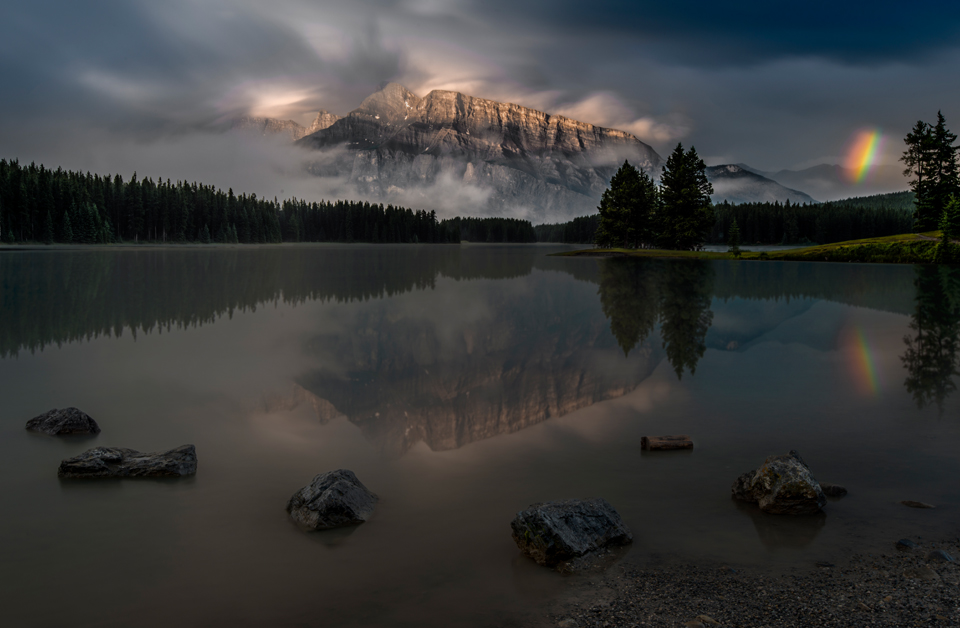 No, this isn’t a sales pitch.  It’s just a simple question I’ve been asking myself.  How many mornings would you get up at 4am with less than 5 hours of sleep and then drive in total darkness in a foreign country on unfamiliar roads to have the chance to take this shot?  Two…three times… maybe?  But what if you had to do this twelve times…after first flying nearly 3,000 miles and camping in a leaky tent while it rained nearly non-stop for a week in a half?

Yeah, I’m asking myself that question because my son and I went to the Canadian Rockies last month.  As it turned out, the 12 days we were there had the dubious honor of hosting some of the worst weather on record.    Of course you never expect the skies to be perfect for an entire trip, so even though you might plan where to photograph every, single sunrise and sunset, you know that some of them won’t work out.

Well, this time we didn’t get a single decent sunset the entire trip…totally skunked.  Sunrise wasn’t much better, there was one decent, but unspectacular morning early in the trip and we got some nice shots of Crowfoot Mountain.

But after that…zilch, zip…nada.  Truth be told, as the trip started to wind down, it did get to be a bit depressing.  Don’t get me wrong, we took advantage of the overcast skies and photographed some killer waterfalls plus the animals didn’t mind the rain which allowed us to enjoy some of our best wildlife photography ever.  And honestly we had a few partially cloudy afternoons which allowed us to do some hiking and see the Canadian Rockies in all their glory.  Just not at sunrise… or sunset…sigh.

Not only that, but I nearly didn’t get this shot at all.  My son and I had showed up at the dark and empty Two Jack Lake  parking lot thirty minutes before sunrise (for the third or fourth straight day), set up our tripods in the rain (for the third or fourth straight day).  We aimed our cameras pointing at Mt. Rundle (well, we couldn’t actually SEE the mountain, but we knew it was out there somewhere to the southeast:)  Then we sat down in the car and waited.  And waited.  Sunrise came and went with no sign of sun.  After about an hour of some sleepy father and son bonding, we just looked at each other, shook our heads,  packed up and and left.

A few minutes down the road I spotted two nice bucks grazing in a meadow off to the right.  Since we certainly had the time, I pulled over, grabbed my big 200-400mm and stalked them for a bit.

And then a funny thing happened.  After 15 minutes or so I noticed a bit of blue starting to peek out from behind the clouds.  We weren’t that far from Two Jack Lake so we turned around and headed back just to see if we might finally get lucky and see some actual sunlight.

As we pulled into the small and still empty parking lot, I saw that Rundle was actually visible thru the breaking clouds. 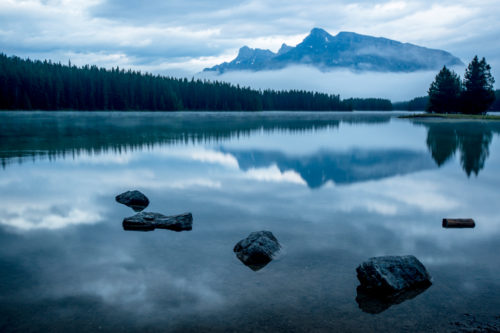 Now, there wasn’t much in the way of color, but hey, it wasn’t raining (for once) and we could actually see the mountain.  So we set up our tripods and started to snap a few shots of Mt Rundle.  And then, gradually, a bit of sunlight struggled thru the overcast skies and a small, partial rainbow shimmered to 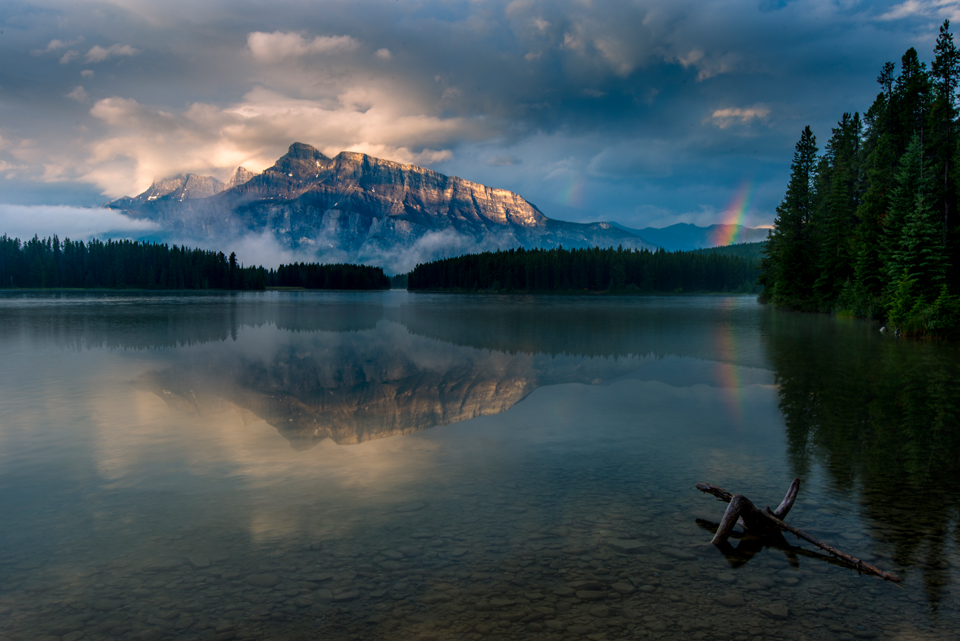 life off to the west.

Ryan and I perked up and we started to get a bit excited.

Suddenly a shaft of sunlight ripped thru the clouds and lit up the mountain.  In that moment, the scene before us morphed from mundane to MAGIC!

Over the next seven minutes, we had an absolute ball!  Since we had already spent hours there, we certainly knew where to go.  We ran from spot to spot to photograph from every possible perspective.

But within a couple minutes, the rainbow started to fade. 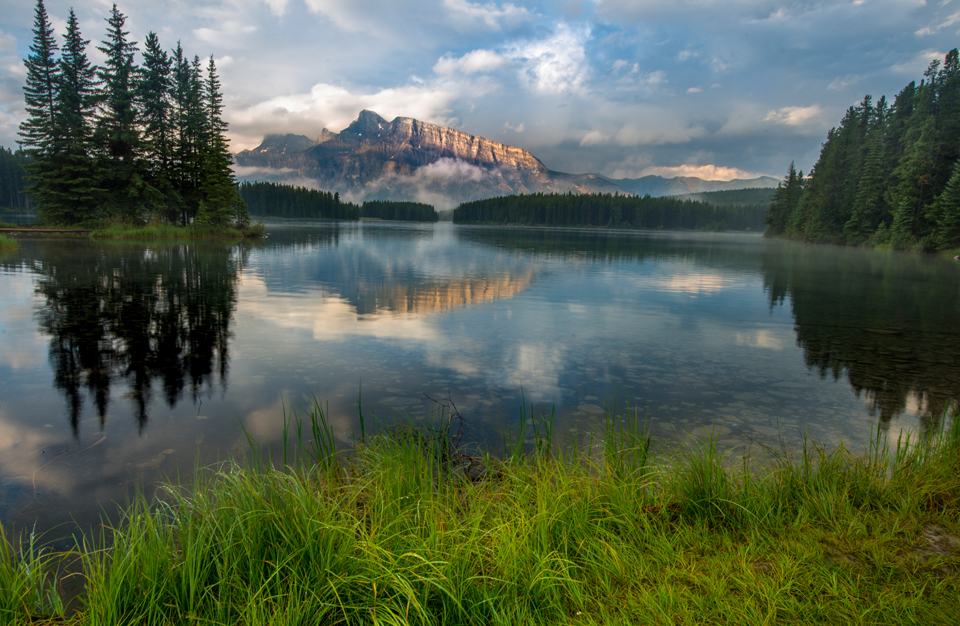 And then, the rain came back, again and the mountain vanished… again.   And it didn’t come back.

Ryan and I looked at each other and just grinned.  Here we stood in one of the most popular sunrise spots in the Canadian Rockies during the busiest time of the year.  Photographers usually line the shoreline, tripod to tripod at sunrise ….and we were the only souls there.   And had witnessed an absolutely incredible, epic, sunrise!

As the rain picked up and splattered around us, a couple Canadian Geese wandered over like they were asking…”Hey buddy, did ya see that sunrise? Wow…that one was pretty damn impressive, wouldn’t you say?!”

So…back to the original question.

What is this shot worth?

Was it worth it?

Well, I’ll never sell enough prints of this shot to pay for the trip, so financially, no it wasn’t.

But, it was one of the most dramatic sunrises I’d ever had the good fortune to witness.  I’ll forget hundreds of other average, normal, nice sunrises…but I’ll remember this morning with my son until I’m on my deathbed.  When I look at it that way, yes…it was worth twice the price.