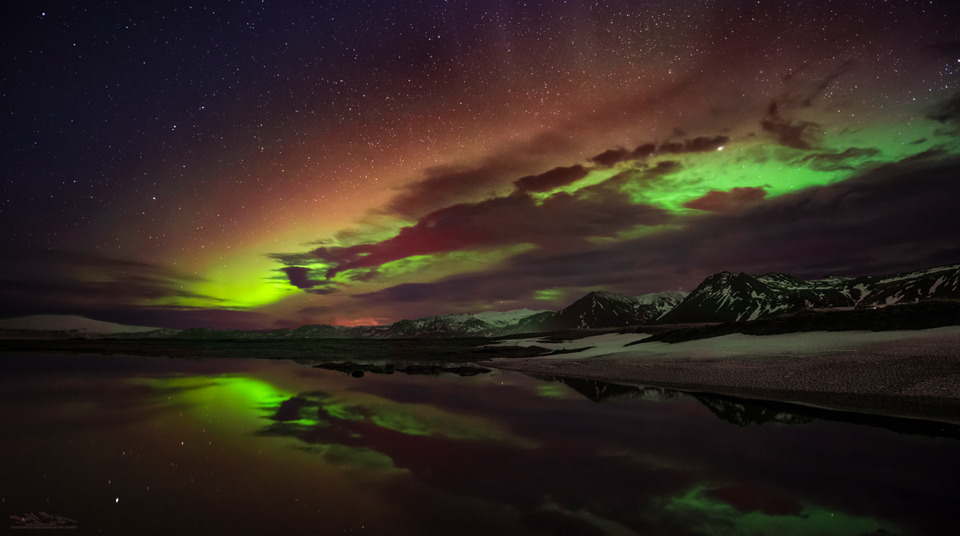 When I sit down to write a blog recapping a photo trip, the process is pretty simple.  I think back about what was truly amazing or unique about the location and just start there.   And that is precisely why I am having such trouble starting this blog about Iceland.

Iceland has auroras, ice caves, waterfalls, glaciers, geysers, icebergs, sea stacks and much, much more.  Exploring and photographing any one of these treasures would have been plenty for a single trip…or blog.    Trying to condense this trip into a detailed and comprehensive article that wasn’t too lengthy was not possible, no matter how I agonized over it.

So, I am going to wuss-out and instead create a series of shorter blogs, each one dealing with a solitary topic, like auroras or ice caves.  But before that, I’m going to pop out this brief recap  and include some of my favorite images.

Any visit to Iceland starts and ends in the capital, Reykjavik.

The international airport is near Reykjavík.  The city is small, modern, clean and great for pedestrians…and photographers.  Don’t get me wrong, I certainly came to Iceland to photograph the landscapes but Reykjavik had plenty to keep my camera busy while I was in town.

Which was a good thing, because Reykjavik isn’t cheap.  Heck, nothing in Iceland is cheap except hot water and electricity (thanks to Iceland’s abundant geothermal energy and hydro-electric resources).  So I avoided the souvenir shops and expensive restaurants while exploring the town on foot eating Cliff Bars and clicking away with my Nikon.

After checking out Reykjavik and adapting to the 6 hour time difference, I took the next few days to visit the Snaefellsnes Peninsula and the nearby ‘Golden Circle’.  The weather was rainy and overcast but the incredible landscape still yielded dramatic black and white images.

The rain got worse as the trip progressed, but that only made the rugged coastline that much more alive to the camera:

Although I hadn’t seen the sun since I arrived, things turned around that night.  I was checking the sky every couple of hours (heck, who needs sleep) and about 4 am the skies cleared and the aurora made an appearance.  I had nearly two hours of uninterrupted bliss photographing the aurora and nearby mountains reflecting in a shallow lake until the dawn washed it all away.

Tired, but happy, I headed down the coast a bit to check out the seals at Ytri Tunga Beach.

One of the more interesting waterfalls I saw was Hraunfossar.  The water here doesn’t fall over the top of the rock cliff…it actually seeps out through the porous volcanic rock face.  Never saw that before…

I returned to Reykjavik and the next morning joined the ‘Arctic Exposure‘ photo tour that would consume the next ten days.

Although I usually prefer to explore and photograph on my own, many of Iceland’s photographic icons are simply not reachable via rental cars during the winter.  Plus, being a Floridian, my experience driving on snow and ice is sorely suspect.  I was reassured that this tour featured a $250,000 Mercedes  ‘monster-truck’ that had been especially built for the off-road winter extremes in Iceland.  Plus, our guide Aron was not only a talented photographer but also an expert winter driver who had once spent a year managing the vehicle fleet for a BBC production in the Antarctic.

Iceland isn’t a huge country…about the size of the state of Georgia.  The ‘Ring Road’ is a two-lane asphalt highway that circles the perimeter of the island.  Our tour drove the entire road counterclockwise and we indulged in many side trips to remote spots that Aron had found over the years.

Seljalandsfoss was one of our first stops.  Set in a huge natural amphitheater, it is one of the country’s natural treasures.  The downside is that it isn’t that far from Reykjavik and is easily accessible…which means that it is packed with tourists.  Even during the winter.  Worse, it has been photographed to death and I was frankly a bit intimidated contemplating how to find a perspective that wasn’t identical to the thousands of others on the internet.

There are a number of sea stacks and arches around the island.  That evening we photographed Dyrhólaey, a gigantic, 400 foot black lava arch.  The western face of the arch stubbornly stayed shaded by clouds for the hour we waited for sunset.  Then, once, and for less than a minute, a glimmer of sunlight weakly illuminated up the arch.  It was just enough…

When my brother Greg, kayaked around Iceland in 2007, he had a bit of fun and paddled right through this arch. His 33 day circumnavigation is still a record… and my brother is still a beast.

The next morning, we visited the basalt sea stacks of Reynisdrangar, which are framed by one of the black sand beaches that are so characteristic of this volcanic island.

The glaciers in southern Iceland conceal numerous Ice Caves, which had long been on my bucket list.  It was worth every second of the wait.

Another famous spot for photographers is Diamond Beach.  Its claim to fame is that Europe’s largest glacier (Vatnajökul) calves into the Jökulsárlón glacial lagoon and the ice is swept out to sea.  Then the Atlantic tosses them right back up on the black sands of Diamond beach.  It was an incredible sight at sunrise…

Iceland can also give Patagonia a run for the money when it comes to awesome mountains.  Vestra Horn was particularly impressive.

As we continued east and then north we stopped seeing crowds of tourists.  Or towns.  Or cars.  Or much of anything other than the thin ribbon of the Ring Road and some bleakly magnificent landscapes.  Iceland has a population of only 350,000 (vs. 18 million in Florida).  And with nearly a third of the population living in Reykjavik,  people tend to be few and far between in the rest of the country.

The weather started to change as well.  Aron had told us that it had been unusually warm and rainy but by the time we reached the little outpost of Mývatn (population 200), that started to change.  Snow began to fall and the temperature started to drop.  A lot.  Our coldest night would peg out at -22F (-30 Celsius).  As I recall, we spent a good part of that night photographing the Northern Lights at Godafoss.

Despite numerous layers of high-tech cold weather clothing, my fingers and toes certainly felt the cold…at least until they went numb and didn’t feel anything at all.  Oh, and let me tell you about the time I was peering into my viewfinder setting up a shot.  I close one eye when I use my viewfinder..right?  Well, when I tried to open it, I found that a bit of moisture on my eyelashes had frozen and stuck it to my cheek.  Ever rip off a band-aid?  Well, eyelashes grow back and I’ll have that photo forever…but, just saying…

We stayed in the Mývatn area for three days.  One of my favorite locations was a pond punctured by a petite island crowned with a stunted tree that some enterprising Icelandic photo tour owner must have planted.

Our monster truck came in handy in the north, brutalizing its way to locations that would have been impossible with a regular vehicle.   One ‘normal’ passenger van tried following the path we forged to Dettifoss but ended up breaking its differential.  Those poor folks had a long, cold (and expensive ) wait for a tow truck.

One of my favorite waterfalls was Aldeygarfoss.  Surrounded by basalt columns, it is blessed with a remote and regal setting in the Icelandic highlands.  We spent a few hours there waiting for sunset.  It was truly magical and I doubt I’ll live long enough to forget its grandeur.

In addition to the landscape, I was also impressed with the native Icelandic horses.  The island is home to 80,000 of them (nearly one per every four residents).  I learned “never to call them ponies…they are real horses, just petite.”  Supposedly descended from the Mongolian warhorses ridden by the legendary hordes of Genghis Khan, the Icelandic horse has been pure-bred for a thousand years.  To maintain that legacy, horses cannot be imported into Iceland and if one is shipped off the island, it cannot ever return. 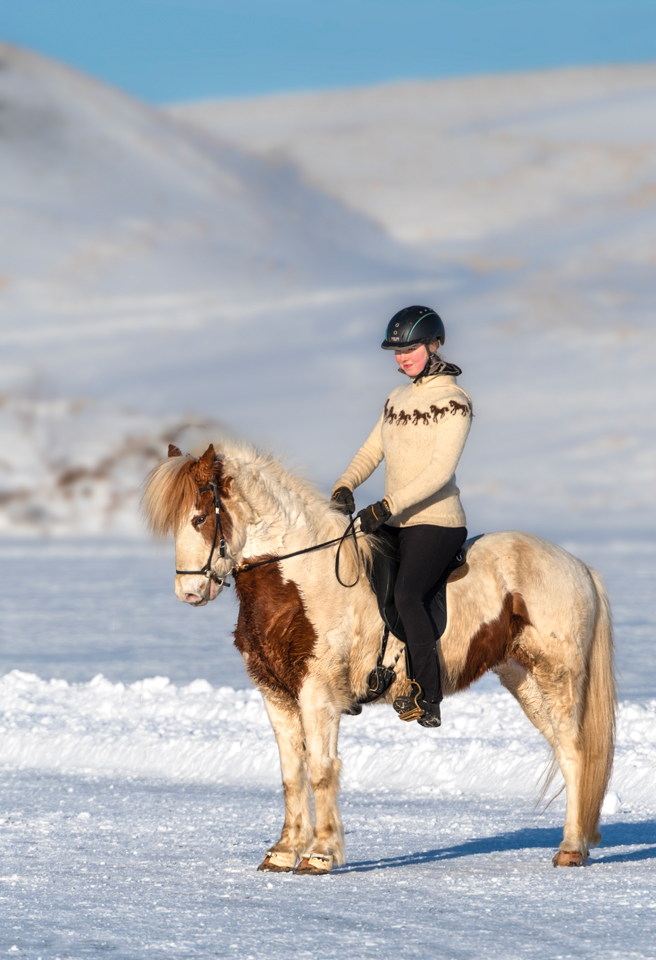 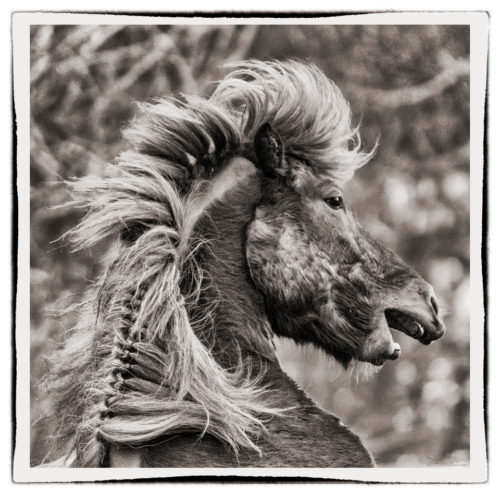 One other tidbit is that the Icelandic horse is the only one in the world that has a 5th gate.  I don’t really know what that means other than it gives the rider a really smooth ride. 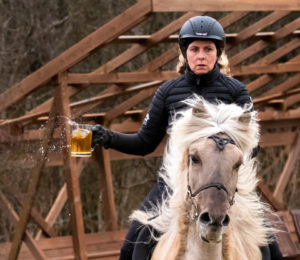 To prove that point, one of the owners at a local stable galloped with a glass of beer in her hand. Yes, she spilled a drop or two, but the glass was practically full at the end of a full lap.  I was impressed…and relieved that no beer was wasted, especially since beer has only been legal in Iceland since 1989.

All too soon, we were back in Reykjavik.  The ten of us on the tour had certainly bonded by the end of the trip.  Tens of thousands of photos, hundreds of miles and many bottles of wine undoubtedly contributed to that camaraderie.  It was sad to break up the team and head home.

But I will be returning to Iceland.  There is so much more to explore and it is all on a compact, modern island where the people are polite, punctual and speak English.  Plus they drive on the right side of the road which will come in handy when I return in a summer or two and rent a car of my own.

Hope you enjoyed this brief recap of my trip.  If you have a preference on the subject of my next Icelandic blog (Ice Caves, Auroras, Waterfalls, Diamond Beach…) pop me a note and vote on your favorite!

PS:  I’m heading out to Arches NP and the Bisti Badlands next month.  Hopefully I’ll be able to squeeze out another blog before then.

PSS:  I unreservedly recommend Arctic Exposure.  Yes, the tours are expensive (but like I said, everything is costly in Iceland)…but they are competitively priced when you consider other similar photo tours.  Plus, the level of expertise Aron provided was above and beyond what I have usually experienced on other photo tours.  His experience allowed him to adjust our itinerary ‘on the fly’ depending on the weather conditions.  I like to think that I’m pretty good in quickly scouting a location and figuring out the best perspectives for my shots, but the fact is I wouldn’t have come home with the number of killer shots that I did if Aron hadn’t been our guide…and that is very high praise coming from me.  Also, if such things are important to you, the food and lodging were outstanding.

Finally, please know that I (unfortunately) get no kickbacks or discounts from Arctic Exposure…although I would be certainly willing to consider bribes in the future…

Check out my other blogs about Iceland’s Ice Caves and the Northern Lights!