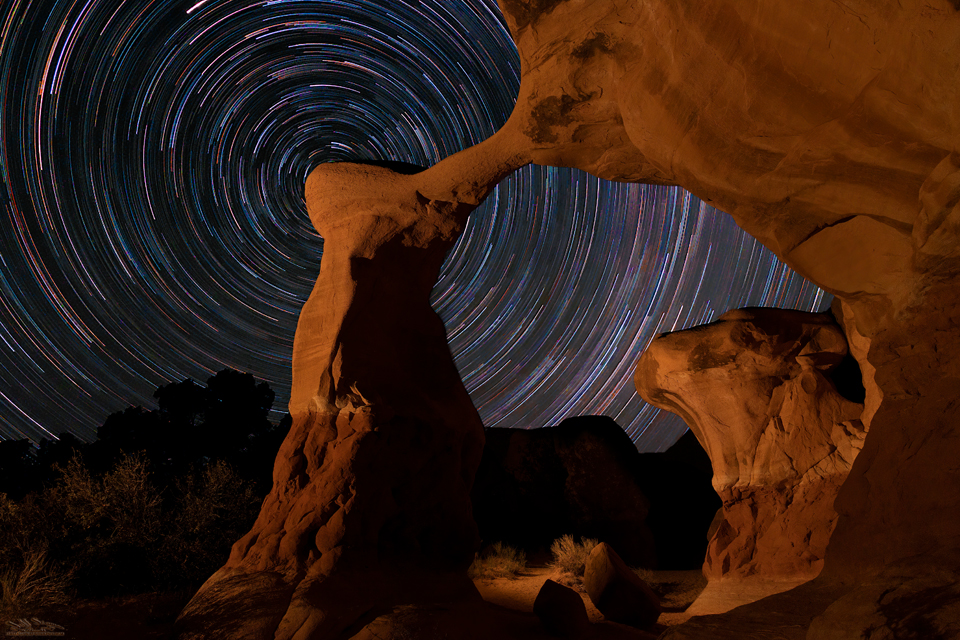 Metate Arch is located in the Devils Garden area of the Escalante Staircase National Monument Utah. This image consists of 29 four minute exposures (two hours) at ISO 3200 combined in StarStaX for the star Circles. The foreground is single 30 sec exposure at ISO 400

Have you ever photographed a ‘once in a lifetime” location and failed to get the shot you really wanted? I guess we all have. But sometimes you get a second chance.

On my first night in Escalante, I photographed the Devil’s Garden and made a real mess of things. I was overconfident, got there too late, tried to do too much, and ended up with squat. Seriously, I wasted a whole night and ended up without a single photo that I’d consider a keeper.

Things went much better on the following nights. I got to the locations super early, my luck with the weather held, and got the shots I wanted. As a result, on my last night in town, I had free time on my schedule and decided to head back to the Devil’s Garden to see if I could find some redemption.

So obviously I got there early. Stupid early. I was taking no chances this time. I was already in the parking lot by 1 am which gave me more than four hours to shoot. Devil’s Garden is pretty compact, you can walk around the whole area in less than 30 minutes. Time wasn’t going to be a problem.

On my first night at the Devil’s Garden, I had tried to make a ‘star trail’ shot. You know, the images where all the stars form concentric circles around the stationary North Star? Well, these images require at least an hour to complete. During my first attempt a few nights previously, I had started shooting at 4:30 am. It was too late. The sky started lightening up within 30 minutes which ruined the shot. This time, I was set up and shooting before 2 am.

One of the most attractive features at Devil’s Garden is a large, graceful arch known as Metate Arch. I had seen some star trail shots done there and wanted to try my hand. By using the Night AR (augmented reality) feature on my PhotoPills app, I was able to walk around and ‘see’ different compositions. I settled on an attractive perspective of the Arch that placed the North Star directly behind its ‘elbow’.

Once that was done, I activated my intervalometer to start a series of 4 minutes shots. All I had to do now is wait a couple of hours for the camera to take the shots (I would later combine these frames at home in Photoshop). Rather than go back to the car and kill time, I had brought a second camera and tripod, so I set off to take some Milky Way shots at another spot a few hundred yards away. By the way, if you would like more info on how to take Star Trail shots, check out this blog.

There are a number of hoodoo formations at Devil’s Garden, but at the time of year I was there (May), only one was positioned well for Milky Way photography. Fortunately, it’s a great one. Known as “The Wisemen,” these hoodoos stand high above the surrounding rock and the view behind them to the south is clear, which makes them perfect as Milky Way foreground subjects.

I set up a couple of lights to softly illuminate the hoodoos and reveal their color and texture. The red, beige, and white banded sandstone was an attractive contrast to the Milky Way. (For detailed instructions on how to take Milky Way shots, see my article here).

Time flies and by the time I was finished with the Wisemen, it was nearly 4 am. I headed back to Metate Arch to see how my star trail shot was doing.

My camera had been snapping away happily in my absence for over two hours, more than enough for my star trail image. I set up my lights and snapped a high-quality foreground shot of the arch at a much lower ISO (without moving the tripod). I would later combine this shot with the star trail shot for the final image.

Since I still had a good 30 minutes of total darkness left, I decided to also try to squeeze in a shot of the arch with the Milky Way behind it. By now, the Milky Way was nearly vertical which nicely complemented the lines of the arch.

Although there wasn’t much time, I forced myself to slow down and concentrate on how I set up my lights. I was particularly careful to situate one of them behind Metate to illuminate a pine tree that was serendipitously visible thru the arch. This final image would turn out to be one of my favorites of the night:

As I packed up and walked to the car, I have to admit that I had a bit of a spring in my step. I had redeemed my pathetic performance a few days earlier and could leave Escalante with my head held high.

One thing that struck me during my four consecutive nights photographing at locations around Escalante was that I never saw another person after sunset. Not one. Actually, other than jackrabbits and one coyote, I hadn’t seen another animal at all. I’m not complaining. I’m a bit of a loner by nature so frankly, I thought it was kinda nice.

Goodbye to Hole in the Rock Road

For the last time, I drove down the washboarded hell that is Hole in the Rock Road. Forty minutes later, I hit the blacktop of Utah State Road 12 and said good riddance with a big smile on my face.

I was headed to Capitol Reef National Park, where I would spend the next two nights. But since it was still early, I wanted to hike out to the prettiest waterfall in the area.

Most of Utah is desert, so understandably it isn’t particularly well known for its waterfalls. Lower Calf Creek Falls is an exception. It is a strikingly beautiful, 126′ waterfall, that slides down a red sandstone cliff face that is stained with desert varnish. The contrast between the blue water, red sandstone, black varnish, green algae, and blue sky makes for a colorful visual delight.

To reach it, you have to hike over 7 miles (roundtrip) along the banks of Calf Creek. The deep sand, lack of shade, and 2,300 elevation gain demand a commitment from you to visit. But the trail is beautiful and the fun that can be had in the oasis pool at the base of the falls make it one of the area’s most popular hikes for locals (especially those that have kids).

The area’s popularity is not new. There is plenty of evidence along the trail that people have enjoyed the area for thousands of years. The cliff walls along the creek still shelter stone structures and Fremont pictographs from the original inhabitants.

After spending the better part of the week photographing arid locations with no sign of water, it was refreshing to hike along a comparatively lush waterway. Heck, I even saw some Mallard ducks!

You could hear the falls long before you could see it. I came around the final bend in the trail and there it was. Truly impressive. Not just because of the height or even the novelty of a waterfall in the desert: I think it was the artist’s palette of colors that was the most captivating. The juxtaposition of desert red rock and a lush waterfall oasis reminded me a lot of Havasu Falls.

Only a single person had got to the falls before me, so I could move around and snap shots without having to shoot around a bunch of tourists (like me).

Surprisingly, by 8:30 sunlight was already starting to illuminate the cliff walls, which made proper exposure difficult. As the direct sunlight increased, I found it necessary to use HDR to deal with the extreme dynamic range between the dark shadows and the sandstone reflecting direct sunlight.

I photographed a number of different perspectives and angles but in less than an hour, I had exhausted every option I could think of. If my schedule wasn’t so packed, I would have slipped off my boots and taken a leisurely swim. But I had a two-hour hike and a long drive ahead of me, so I got on the trail.

The trail was packed on the way back with folks heading to the falls. The heat, heavy backpack, and the fact that I’m no longer a kid took their toll. By the end of the hike and a three-hour drive to Capitol Reef National Park, I was a tired boy.

But I made one stop along the way. There is an amazing panel of Fremont petroglyphs right alongside the road near the Capitol Reef Visitors Center. Seriously, it was only a two-minute walk from the parking lot so I had to take the shot.

I had never visited Capitol Reef before and was particularly excited to photograph the exotic Temple of the Sun. It is located in a remote part of the park so I would have to be up again at 11 pm. But that story will have to wait until my next blog.