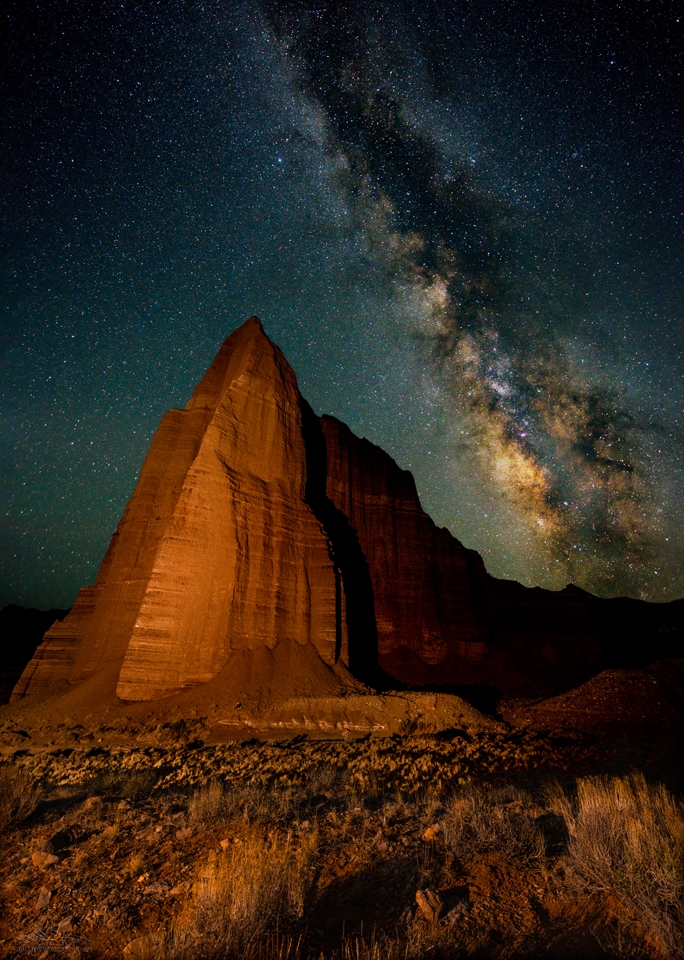 The Temple of the Sun in the Cathedral Valley region of Capital Reef National Park Utah. The Milky Way in this image consists of ten, 8 second exposures at ISO 3200 combined in StarStaX. The foreground is single 413 second exposure at ISO 800. Low Level Lighting provided by two LumeCube 2.0s

I awoke at midnight in the middle of nowhere. Caineville, Utah. Population 50. No stoplight, no gas station, no restaurant…barely a wide spot in the road.

Thirty miles away was the nice little town of Torrey, filled with dozens of hotels, gas stations, restaurants, and 99% of the other tourists who had come to see Capitol Reef National Park.

So why would I be in Caineville instead of Torrey? Because it was 40 minutes closer to the place I wanted to photograph that morning. There might not be much to Caineville, but it does have a hotel. So Caineville it was.

Temple of the Sun

My goal this day was the Temple of the Sun: a remote, iconic entrada sandstone monolith that towers hundreds of feet over a flat desert plain in Capitol Reef National Park. It is impressive and insanely photogenic. I’d wanted to photograph it for years.

It’s located in the remote Cathedral Valley region. Cathedral Valley was named by early explorers after they were awestruck by the massive sandstone monoliths rising from the desert floor that resembled Europe’s ornate, medieval cathedrals.

Cathedral Valley is situated along an isolated 57-mile rough gravel/dirt/rock road known as Cathedral Valley Road. It has no gas, water, food, or cell service. Plus, at one point you actually have to drive across the Fremont River (yup, no bridge). It’s not for the faint of heart and less than 1% of the tourists going to Capitol Reef’s visitors make it to the Temple of the Sun. Unsurprisingly, you can spend a whole day on the road and not see another soul.

There certainly wasn’t anyone on Cathedral Valley Road when I pulled onto it at 1 am. It was only a 17-mile trip but it took an hour before I reached the short spur road to the Temple of The Sun.

I knew that the Temple of the Sun was big, but as I walked up to it I quickly realized that it wasn’t big…it was freaking huge. Most of the subjects I’ve previously used as Milky Way foregrounds had been more modest in size.

The sheer size created some challenges. First of all, it ate up a lot of time setting up just because of the distances I would have to walk between my lights and my camera. Here I had to set up my lights 500′ away to keep them out of my frame. Second, it just isn’t easy to light up something so big.

By 2:40 I had everything set up and started shooting. I first took a series of stacking shots of the Milky Way that I would later combine in Sequator (See this article for an in-depth description about the techniques I use for Milky Way photography). Then I took a shot just for the foreground. To get enough light on the Temple I had to take an exposure lasting over 10 minutes at ISO 800 despite having my LumeCube set to a high illumination setting.

The shot looked impressive on my viewfinder. My only reservation was that it looked a lot like other images I had already seen. Since I always want to create something unique, I decided to try something different.

Where did that tripod go?

I packed up my gear and started looking for the tripod that I had set up a couple of hundred yards to the east with the LumeCube on it. I swung my head back and forth but saw nothing but black. Yup, the battery had run out after a couple of hours of illuminating the Temple. Since there was a new moon, I couldn’t see 2 feet in front of me and there was no way I was going to spot a black tripod.

Fortunately, I had been using my AllTrails app which makes an electronic record of where I had walked. As it was, even though AllTrails got me close, I couldn’t see it until I was 10′ away. I made a mental note to put some 3M reflective tape on all my tripods before I shot at night again.

The Milky Way had shifted well to my right as the hours went by. So I had to move to my left (east) to keep the Milky Way positioned over the Temple. After walking for five or ten minutes, I swung my flashlight back up toward the Temple and was surprised by how different it looked. It was a lot closer and felt intimidating looming out of the darkness. The sharp vertical crease on the front made it look like a massive battleship’s bow bearing down on me.

I’d never seen a photo of the Temple from this perspective and it really appealed to me. It would be my favorite image of the day.

Back to the Moon

It was already 4:30 am and the sky was starting to lighten up as I headed back to the tripod I had set up earlier by the Temple of the Moon.

In retrospect, I should have taken a foreground shot first BEFORE I started the star-trail shot. That was impossible now, so I took some long exposures using the existing light and made the best of it. But no matter how much photoshop magic I threw at it, the result was disappointing. You can see the final (unimpressive) result to the right.

As the sky continued to brighten, it revealed a dramatic landscape that I had only seen glimpses of in the night.

Although the Temples can make dramatic photos when the sun first hits them, I decided not to wait until dawn and instead try a few other different spots while the morning light was good.

I had heard that the Lower South Desert Overlook on Cathedral Valley Road was particularly nice in the morning. It was about 30 miles away, which took a couple of hours on the washboard road. The overlook frames an amazing series of cliffs that stretch in a shallow crescent from north to the south. Spread out before you is an expansive desert floor with monumental sandstone monoliths in the distance.

The morning light was still low and warm and I ran back and forth trying different compositions when I suddenly noticed that I could see my shadow far down in the valley. I had some fun with it:

The next area on Cathedral Valley Road I wanted to explore was the Bentonite Hills. These are wild-looking banded hills in varying hues of brown, red, purple, gray, and green. They are made of bentonite, which is a kind of clay made from volcanic ash laid down back in the Jurassic timeframe.

The colors and shapes were pretty bizarre. This area is one that challenges you to set aside your preconceived notion of landscape photography. Open your mind and eyes and go wild.

By the time I reached the end of Cathedral Valley Road, it was nearly noon and was ready for lunch. But as I drove down Hwy. 24, I had to stop repeatedly to take shots of the amazing landscapes right alongside the road.

That slowed me down and by the time I reached the edge of the park, I was starving and treated myself to lunch at a real restaurant in the nearby town of Torrey. Compared to the oatmeal and Cliff Bars I had been living on for the week, the huge burger I enjoyed was quite an extravagance.

The weather forecast was for partly cloudy skies by evening, which would make Milky Way photography that night a no-go. So I decided to try for a sunset shot instead. To make it until the end of the day I grabbed a nap under some Cottonwoods along the road.

Feeling rested a few hours later, I headed back down Cathedral Valley Road for the second time that day. I took my time and enjoyed a few short hikes.

As the day wore on and the shadows started to lengthen, I decided to get to my sunset spot. The view from the Cathedral Valley Overlook has been described as one of the most dramatic in the American West and is at its best in the late afternoon.

But first I had to get there. You know, parts of Cathedral Valley Road really aren’t that bad for a gravel road. Much of it is far better than the Hole in the Wall Road in Escalante I had ‘enjoyed’ earlier in the week. But the section of Cathedral Valley Road as it winds up to the top of the plateau near this overlook were as bad as any road I’ve ever been on.

But it was worth it. A short hike from the small parking area at the Cathedral Valley Overlook and I could see this in the distance:

The overlook is truly, truly awe-inspiring. The monument-filled valley is rimmed by amazing banded-sandstone cliffs. I used my telephoto for some shots of the ‘cathedrals’ in the distance before changing to wide-angle lenses. Sunset was scheduled for 8:30 but color was already starting to paint the clouds a half hour before then.

The sunset wasn’t spectacular, but the sun filtered through some thin clouds near the horizon casting a wonderful orange glow over the entire scene resulting in this image:

The horizon clouded up right before sunset. I had hoped for one of those once-in-a-lifetime, over-the-top sunsets but then I would have stayed until the last bit of sunlight had faded. And then I would have had to tackle that crappy road in total darkness, so maybe it was a good thing.

It was nearly 11 pm when I got back to my hotel…about 22 hours after I had left it that morning. Despite my nap, I was tuckered and treated myself to a full night of sleep. Tomorrow I would loaf around and shoot a leisurely sunrise shot. But that story can wait until the next blog.